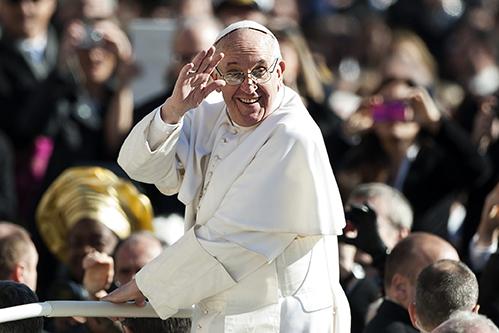 Since his election in 2013, Pope Francis, Bishop of Rome, has opened a few discussions on topics previously avoided like homosexuality and divorcees. Following his visit to Brazil, Pope Francis shocked both Christians and non-believers when he showed a rather tolerant approach to homosexuality: “If they accept the Lord and have goodwill, who am I to judge them?”

While the Pope is not a dictator and cannot (and will not) rewrite the Bible to accept all of those previously condemned by conventional Catholicism, his liberal leadership seems to be leading the Catholic Church in a new direction.

In October, the Vatican released the first draft of the 2014 Relatio post disceptationem for 2014 Synod of Bishops, which, among other topics, discusses the status of homosexuals and divorcees within the Catholic Church. This document poses sticky questions like whether the Catholic community is able to accept homosexuals “without compromising Catholic doctrine on the family and matrimony” as well as how to care for “wounded families.”

Even though this seems like a big step towards a less conservative Catholic Church, these statements are mere discussion topics. In reality, it would be more shocking if the Church didn’t bother to mention divorce or homosexuality considering the increasing acceptance of divorcees and homosexuals throughout the Catholic world. In Mexico, for example, where 82% of the population is Roman Catholic, the divorce rate has been increasing steadily since the late 1970s. Likewise, in 2010, Argentina, where 76.5% of the population is Roman Catholic, signed Latin America’s first same-sex marriage law.

How much the Church is going to act upon such recurring topics can be inferred from the most recent final report of the Roman Catholic Extraordinary Synod on the Family, which completely removes the proposed “welcoming” of gay people and the acceptance of “broken families.” Even with a revised passage on accepting homosexuals that omitted much of the most controversial sections the excerpt failed to be approved by the two-thirds majority.

This is certainly the beginning of a conversation, but where is this taking the Catholic Church?

Since Pope Francis’ first disputed statements he has been called “my hero” by LGBT-rights advocate Elton John and harshly criticized by the conservative ends of the Catholic Church. In an interview with Buzzfeed, the most outspoken critic of Pope Francis, American Cardinal Raymond Burke said the Relatio “does not have a good foundation neither in the sacred scriptures nor in the Church’s perennial teachings.”

The next Extraordinary Synod on the Family is scheduled for October 2015 and regardless of pleas for less controversial topics, the topics of homosexuality and divorcees are “a work in progress,” said a spokesperson for the Vatican, according to The Guardian. Likewise, the report on the Synod said that “the [homosexuality] question will be further explored,” implying another revision for the welcoming of homosexuals and divorcees.

Although the excerpt on homosexuality did not get the two-thirds necessary to be passed, 118 bishops voted for the text while 62 voted against it; indicating that the Catholic Church is not as conservative as it appears to be. Bishop Francis DeBernardo, executive director of a Catholic gay rights group, challenged the final decision to take out the most controversial pieces. “The bishops have taken a narrow view of pastoral care by defining it as simply opposition to marriage for same-gender couples,” Bishop DeBernardo told Reuters.

According to Anglican Bishop Paul Butler, present at the Synod, there is a “lack of awareness” of contemporary family life that impedes the modernization of the Catholic Church. Nevertheless, this is the first time in nearly three decades the has Pope called for an Extraordinary Synod on the Family showing that Pope Francis is aware of the current issues dividing the Catholic faith. By opening such a controversial discussion, the Catholic Church seems to have reconnected with its younger and more secular followers while taking into account the essential doctrines of Catholicism.