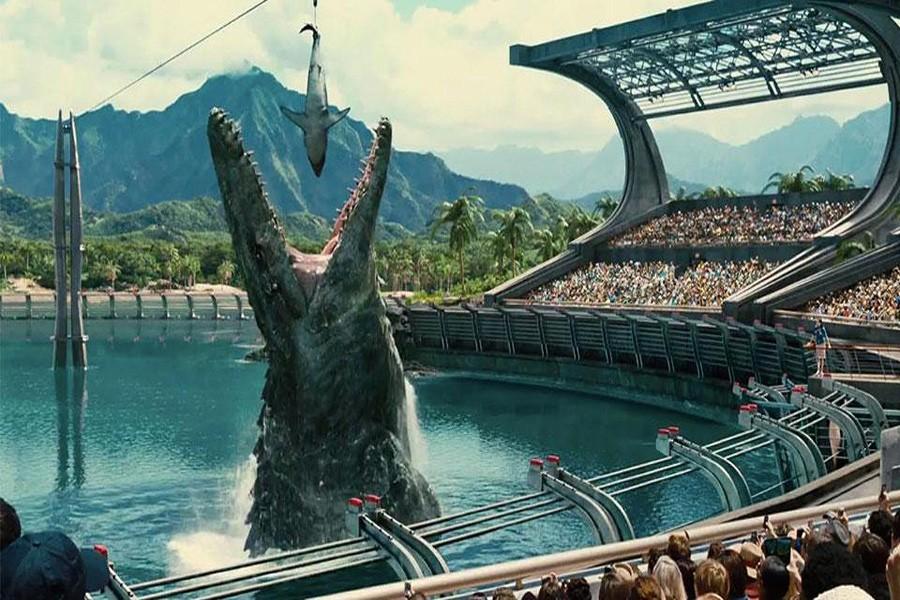 With the invention of the 3D movies in the 20th century, the 4D invention has now seized its place! During the summer, 22 new 4D movie theaters opened in Japan, four of them in Tokyo. These movie theaters are not only a visual experience, but one in which you can both feel and smell, adding a whole new dimension to the movie industry. I recently saw Jurassic Park and was overwhelmed by its intensity. The viewers were splattered with a mist of water as the dinosaurs roared at the characters in the movie. The theater illuminated along with the sound of the gun shot aimed towards the dinosaur. The chairs jerked forwards and backwards as the dinosaurs stampeded through the forests. The constant movement and wetness may be a turn off, and I advise against 4D for those who get sick on bumpy rides and roller coasters, but if you enjoy thrilling rides, prepare to experience a whole different world!

Every season, Starbucks releases their updated frappuccino, and possibly everyone by now has seen the advertisements for Starbuck’s latest Chestnut Crunchy Creamy drink. With the frappuccinos taking the spotlight, the cheaper and tasty drinks are tossed to the side. However, with the Japan Meteorological Agency predicting lower temperatures during the morning and night, we might be looking for something a bit warmer. So when your body cools down by the end of the day and you have four 100 yen coins sitting in your wallet, try the Starbucks Hot Chocolate. The hot chocolate is encased in the simply designed Starbucks cup, and the warm sweetness brings you the feeling of sitting by a cozy fireplace in a chilly winter wonderland.

Following Justin Bieber’s bad-boy phase, the very mention of the teen idol’s name seems to have gotten on everyone’s nerves. However, all Beliebers can rejoice in the fact that he’s come back stronger than ever. After an emotional performance at the MTV Video Music Awards, Bieber stated that he “just wasn’t expecting them to support me in the way they did. Last time I was at an awards show, I was booed.” Well, it seems as though the audience at the show aren’t the only ones rooting for the 21-year-old because his latest single “What Do You Mean?” was streamed 21 million times in a period of five days, breaking the record for most-streamed single on Spotify. Despite the fact that the past two years have been a bumpy ride, it looks as though Justin Bieber really never says never.

Tired of the Rain, Anyone? (Reshma)

After September 6, it seemed like the rain had finally gone on vacation. However, in the following week of school, Tokyo was once again deluged by rain. Known to the Japanese population as Uki, this rainy season serves as a transition from summer to autumn. Although I don’t directly condemn record breaking rain itself, it’s the inconvenience it’s causing that is a burden. Being awakened by dark, gravel-gray clouds moving towards you, depositing buckets of water, wet shoes and socks, train delays, and seasonal affective disorder (SAD) are nasty, though survivable, side effects of the prolonged rain.

Unfortunately, in Tochigi and Ibaraki prefectures, the aftermath of Typhoon Etau has burst river banks, tore houses from their foundations, and displaced over 100,000 people. A free dress day will be held on September 17. All of the proceeds from this day will be donated to assist Tsukuba International School–which is currently housing many evacuees in Ibaraki prefecture. Our thoughts and prayers go to those who have been affected by Typhoon Etau.

When Netflix, a U.S.-based video streaming service, first announced that it was finally coming to Japan, many Sacred Heart students, including myself, were jumping for joy. For all of us who were looking forward to binge-watching foreign TV shows, Netflix in Japan is a major let-down. This is primarily due to the company’s alliance with Fuji Media Holdings Inc.. In order to capture the Japanese audience, Netflix announced that it would be offering a “wide” range of both Japanese and American TV shows. While it is clear that Netflix tried its best to keep a 50:50 ratio between streaming content from Japan and the U.S., the line-up is simply disappointing. Many of the U.S. shows offered are either outdated or, even when the shows are relatively new, they lack the latest seasons. While this is the company’s first foray into Asia, it cannot be denied that it will be much harder to attract viewers in a country where paying for online content is not yet considered to be the norm.

The museum offers two galleries and several floors of interactive, detailed models of countless science experiments and theories. Ranging from the seemingly boring sedimentary rocks to the life-size, stuffed buffalo, the museum pleases the curious child lurking in us all. Unfortunately, the “Leaps of Evolution” exhibit is merely a small annexation of that. Much of the exhibit can be found in greater detail on the three floors that are already dedicated to evolution. Offering only a handful of models and fossils, it relies heavily on a person’s willingness to watch video after video. Fortunately, the exhibit ends abruptly and so do the screams of claustrophobic young children. As you leave, you may find yourself pondering the complexity of life rather than key events in scientific history. The exhibit is great if you only have 20 minutes to study for a test on evolution. Otherwise, save your 600 yen for space ice-cream and dehydrated tofu.