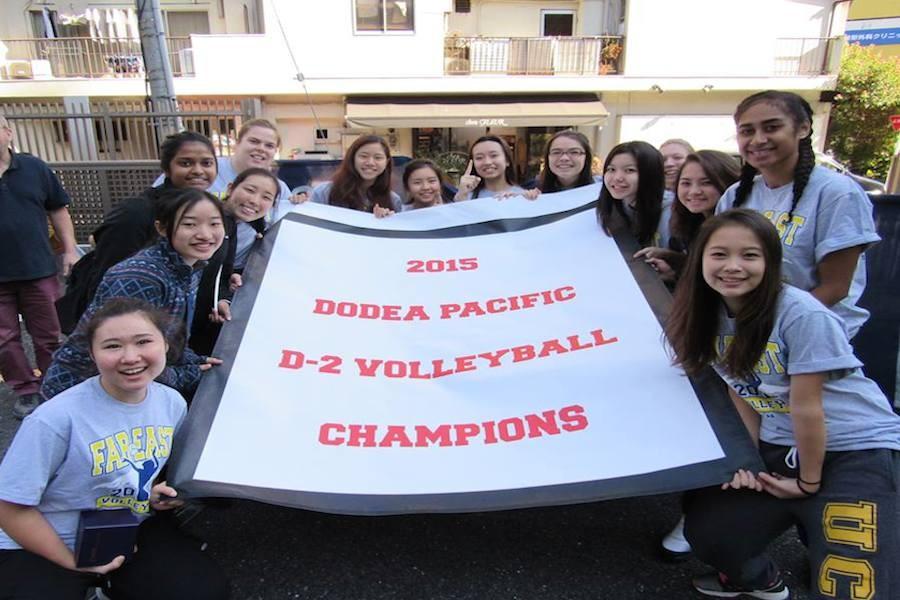 It has been 10 years since the DODEA Pacific Volleyball Champion banner has found its place in the Symbas home gym. On November 6, following the Varsity Volleyball D-2 Tournament at Yokota, the ISSH Far East team was welcomed back by the student body, faculty, and family with tears and an ovation as they made their way, as champions, onto the campus.

Captain, Yoko (12), said that unfaltering positivity was what led them to their victory. The winning game was composed of four sets. The team lifted themselves from each mistake, and remained committed to their next move no matter the circumstance. The first was won by ISSH 27 – 25, the second was won by MC Perry 20 – 25, and the third and fourth were won by ISSH 26 – 24 and 25 – 14.

The team’s unity of equally strong players was also a component of the team’s success. There was no individual key player on the Symbas side of the court, but with their combined efforts, the team surpassed the others, and won the tournament as a group.

Winning the tournament was also a matter of preparation. The team and their coach, Ms.Braun, strategically produced a plan, which brought them to the top of the pack.

Part of the plan consisted of changing up their plays and positions to increase the risk of losing on the second day of games against Zama and Yokota. This was to avoid facing both Edgren, who had beat them on the first day of games, and the teams seeded first and second in the tournament.

The plan worked, and the Symbas went on to beat Osan, who had been seeded third place. Later, the team ended up facing Edgren again, except that this time the Symbas were ready to conquer. It eventually led them to the tournament’s last match, between Sacred Heart and MC Perry.

Though the players had difficulty compromising in some games to follow the plan, the end result proved to be worth all the discipline along the journey. Kolora (12) said, “We won together, we lost together, we laughed together, and we cried together.”

The championship game left the strongest impact on the team, especially on Yoko, who struck the last and winning spike. In the last set, the captain nailed the ball to the corner of the court, where the opposition unsuccessfully received and shanked the ball. Mia (10), fellow team member, agreed that this was the most memorable moment. She said, “As soon as she hit the ball, we knew we had won.”

Mia (10) also mentioned that many of the team’s members avoided looking at the scoreboard during the game, as it keeps their motivation going and circumvents discouragement during the game. Although, because of this rule, at the moment of victory, part of the team took some time to come to the reality that the points on the scoreboard added up to their championship.

The team was further praised for their abilities, as various of their members were presented with awards. Nina (11) earned an award for outstanding sportsmanship. Rina (12), Nina (11), and Yoko (12) were All Star Players, and Yoko (12) received the tournament MVP.

Although only 9 out of 12 varsity volleyball players were able to go to the Far East tournament, the team benefitted throughout the season by their supporters who never failed to encourage them. Yoko (12) said, “It truly was our victory. It was the whole team, the whole school, and the whole community’s victory.”