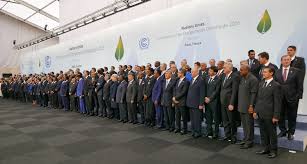 Photo shows the participants of COP21

The final agreement presented by the French COP21 Presidency is now available online. The major parts of the legally binding agreement ensured that the 43 countries that attended the meeting should work to keep the global temperature constant (less than +2 degrees Celsius). In addition, the agreement encouraged more economically developed countries to fund less economically developed countries, by promoting environmentally friendly goods and innovation. The agreement ensures that the promotion should not impact food production and that businesses present at the meeting fund research on low greenhouse gas emission.

Climate change is a big deal. With stronger typhoons, hurricanes, and cyclones, crops will be confused about the season, and rising sea levels will continue creeping along shorelines of small islands.

Mr. Sharp, the Environmental Science teacher, didn’t expect a lot from the meeting. Before the Paris meeting, there was the Kyoto Protocol 20 years ago. The Kyoto Protocol meeting concluded with an agreement that was similar to the one made in Paris, but was not signed by the US and Australia. Additionally, since the global temperature has risen since then, Kyoto Protocol could be considered a failure. Comparing the two meetings, Mr. Sharp said, “At COP21 all major countries did agree to commit to change in an agreement called the Paris Agreement. This is a step forward compared to the Kyoto Protocol… However, the Paris Agreement only requires countries to write regular reports tracking their greenhouse gas emissions.” In essence, taking a record and graphing the numbers only organises what is going on; and this does not enforce the stopping of the increase in global temperature.

Anjana (12), an Environmental Science student, said, “As long as there is an increase in population, there will always be a demand for electricity, but by burning more coal, you emit more greenhouse gases that increase the global temperature,” indicating that the cause and solution to the rise in temperature lie somewhere else. She suggests that each person in the world save a bit of energy everyday — but not so much that goodwill ends up causing health problems (like walking during snowstorms or not using air conditioning when the temperature is higher than 37 degrees Celsius). Mr. Sharp said, “huge numbers of inventors, scientists and engineers are creating real and tangible solutions that are starting to be implemented,” and gave examples such as Tesla Motors — a car that is powered by electric motors and yet 88% efficient.

As we hope that the Paris Conference was a success, let us drink a cup of tea, wear a warm sweater, and read a book about energy conservation.