What does it mean to be “whitewashed”? 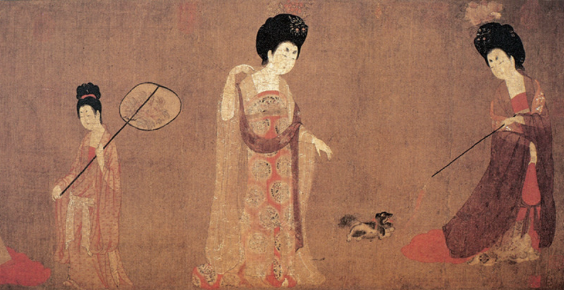 After Western Fans of BTS denounced Korean fans for “whitewashing” photos of BTS, there has been an ongoing feud on Twitter with accusatory tweets that have gotten over hundreds of retweets. According to these Western fans, Korean fans had photoshopped BTS so that they look paler than they actually do in real life—“too pale” to be Asian. 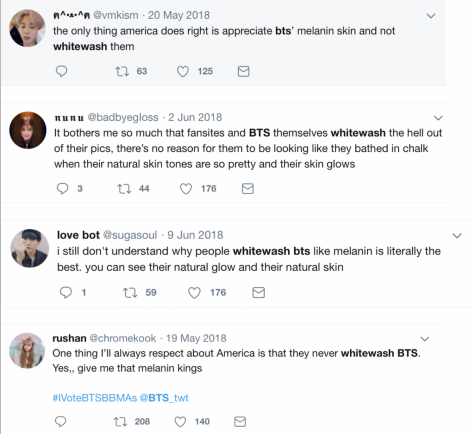 To start with, the word has several meanings. First, there is the literal definition of whitewash: to paint a wall or a room with white paint. Then, according to Wikipedia, there is the figurative definition of having one’s “vices, crimes or scandals” “glossed over” with metaphoric “white paint”. These denotations have stretched far enough to criticize white people painting over people of color with “white paint” in media. In other words, the term is used to shed light on Hollywood’s racist approaches towards depicting non-white figures as white, like when the book-to-movie adaption of The Martian (2015) had two white men play the roles of Dr. Venkat Kapoor and Mindy Park, neither of whom are white in the novel. Therefore, when a movie is accused of being “whitewashed,” it is indicating that we, as consumers (and audiences) of the movie, are aware of biased portrayal of non-white characters—and that we are angry about it and willing to take action to rectify it.

Ironically, however, this word points out that society’s discrimination has evolved even further—and in the process, “whitewashed” completely transformed its meaning—to act as a derogatory term against people of color.

Thus, the saying, “She’s so whitewashed”.

“Have you seen Minji hanging around with the white girls? She’s so whitewashed,” people will say to accuse an Asian girl who is doing nothing but being herself.

Or, just because Minji is not so good at math or speaks English or plays a sport, she is condemned for being “washed” “white” and undermining her Korean heritage.

But what right do these people have to judge Minji identity just because her character doesn’t fit the Asian stereotype? The condescension that is implied in this use of “whitewash” is not only offensive but also regressive in the 21st century. Little do they know that they are using a term that was initially used to fight against racism to now perpetuate racial stereotypes.

Like the word “cultural appropriation”—another buzzword that seems to instigate controversy among people these days—“whitewash” fails to serve its initial purpose of promoting globalism and acceptance. Instead, the word encourages people to perceive identity as a white-or-non-white dichotomy and assigns Western culture superiority over other cultures—or else, why would some people jump to the conclusion that all Asians want to be white?

Since “whitewash” also refers to the covering up of one’s faults, it suggests that the accused is attempting to emulate “white” people and their culture by “washing” (or perhaps “purifying”) themselves white. “Whitewash” assumes that the non-white person is willing to give up their unique color to become “white”–as if they are ashamed of their own heritage and wish to purify it.

Obviously, though, not fitting a particular stereotype does not diminish one’s ethnicity or identity. In fact, accusations of “whitewashing” are often times incorrect. For example, the members of BTS in the photos accused of “whitewash” appeared “white” because 1) they actually are quite pale in real life, 2) the stage lighting was too strong, and 3) skin tone adjustments were made while photoshopping in order to make their faces visible in the stage light.

In fact, Asians have historically desired paler faces since Ancient Korea, unaffected by Western culture. For example, beauty standards during the Choson Dynasty (1392-1897) favored women with pale, “porcelain-like” skin that accentuated their charcoal black hair and pigmented lips and cheeks. Such emphasis on pale skin can also be observed in ancient Chinese and Japanese paintings. Although the minute details—the shape of the women’s eyes, for example—may vary, these Asian paintings of the ideal woman share the preference for pale women because paleness signified wealth and status –  the lower classes were tan from laboring outdoors. In other words, non-Asians’ accusations of “whitewashing”, in this context, completely ignores the history of these Asian countries. Thus, such labeling of different cultures is only contributing to today’s rampant Eurocentrism.

As an Asian myself, I really do believe that Hollywood’s ridiculous attempts at portraying non-white characters such as Allison Ng, a character who is of Chinese and Hawaiian descent, by Emma Stone, from Aloha (2015), should be openly criticized. However, the term should not be used to attack non-whites who do not fit into non-white stereotypes. To do so is to deny the beautiful blend of cultures in our globalized world.