The Road to the Beach

Ishinomaki recovers from the 3.11 tsunami 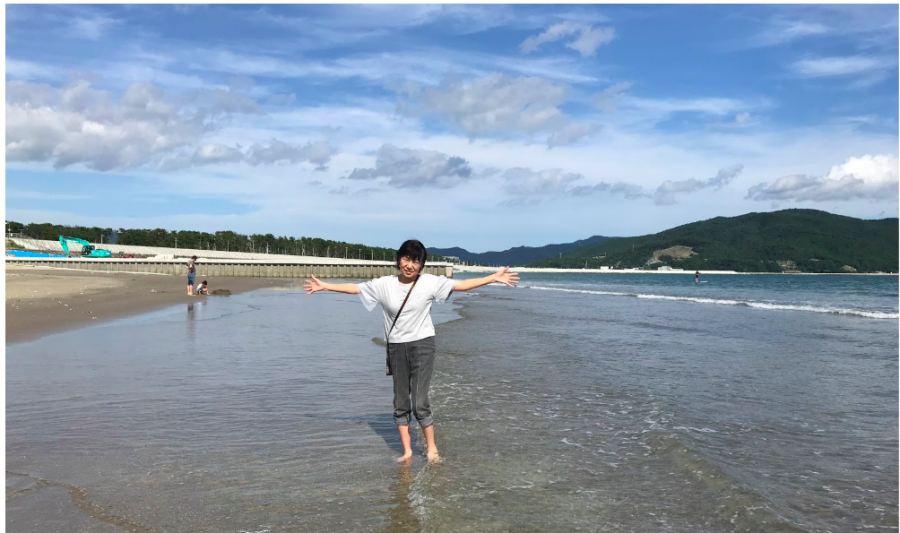 The writer's grandmother posing on the beach in Ishinomaki. On the far left there is a green excavator and the white horizontal line along the center of the picture is the dike.

As we continued to drive toward the beach, I forgot for a while where we were. Big fully loaded construction trucks sandwiched our car, front, back — sometimes on all four sides. The bleak landscape continued on. Until we got off the highway, the open water and clear sky were visible, but now the iron-gray, tall, concrete, dike enclosed us. Coming to enjoy the nature-filled countryside, I felt in a way betrayed.

My grandparents live in Ishinomaki, Miyagi prefecture, which unfortunately became quite famous after the 3.11 disaster. This was the region where the tsunami hit heavily, destroying the lives of thousands of people. I’ve visited there multiple times after 2011, to see my grandparents and to enjoy spending time away from busy city life. There isn’t much to do here in the countryside but this year my grandma took me to a recently re-opened beach — last visited over ten years ago. It was only an hour and a half drive; although there wasn’t much to see from the window, my grandma and I talked about it for the entire ride.

It was my grandma’s first time driving to this side of the city. Every turn we took, every building we passed, every empty lot, took us by surprise. When I saw ten stories tall apartment buildings, along with a new compound of houses, I did not know if I could call this place the countryside anymore. Not so long ago, all these lands were farmland and those trucks would have been nowhere to be seen. With the completion of the construction of the houses and apartments, the temporary houses are mostly gone but very occasionally I spotted occupied ones. According to my grandma, it is extremely hard to rent those newly built houses or apartments because of how many people were displaced out of their original houses. It was inevitable for the city to build taller buildings, to provide homes for people and a place to escape in case of another tsunami. 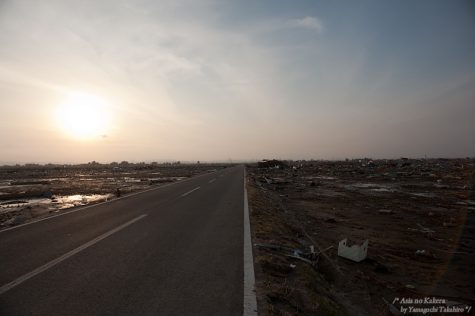 Kiadi Y. CC-licensed Debris scattered along both sides of a road.

Along the way, I spotted a unique pedestrian bridge, standing next to a small mountain. This pedestrian bridge connected the sidewalks and the mountain. When I pointed this out, my grandma did not look surprised. Now, many schools in this region have a path leading up a mountain. Such paths may end up saving lives in the future.

Continuing to drive on the recently renewed road, my grandma commented on how much reconstruction was done in the matter of a few years. This region along the coast must have had the most damage. We passed by a building where there was a line with a label “tsunami came up to this height” alongside the measured height  “10 meters”. I always imagined the tsunami, like a bigger version of the waves seen at the beach or like the famous woodblock print, the Great Wave off Kanagawa. But my grandma corrected my misconception and explained to me that a tsunami is like a fast-moving wall, gulping any obstacles in the way. When I told my grandma how lucky she was to not be too heavily affected by it, she started telling me about that night.

Although I’ve heard the same stories countless times, I let my talkative grandma keep going as I gazed out the window. Some stories were not so weighty, like the one about the meter-long fish swimming in the middle of the road, or how cars ended up on rooftops like an abstract artwork.

Other stories were painful to hear. My grandma retold my favorite survival story of her friend who evacuated right after the earthquake with her family, but returned to the house to get medicines.

That was when the tsunami came; a black muddy wall of water rushed towards the town. My grandmother’s friend went to the second floor of her house but the water came in and retreated with enormous force. The water rose nearly to the ceiling of the second floor, barely giving space for her to breath. By wrapping her arms around the window curtains, she secured herself from being washed out of the house. When the tsunami finally retreated, she dried off her drenched clothing and warmed herself with whatever she could find, shivering in the snowy cold night. The outside was pitch black. Massaging her legs for some blood circulation, she started feeling drowsy. Despite this, she pinched herself to keep awake, because she knew that she could die if she fell asleep. Her battle lasted for the rest of the night, in silence and in the darkness. The next morning, she was reunited with her family at the evacuation site, where everyone had thought she was dead.

Thinking about this story, it stood out how there is hope, even in the darkest times, and all you need is the right knowledge (including a lot of common sense) and a strong will.

About ten minutes away from the beach, my grandmother and I lost our way. The dike which stood at least five meters tall had been barricading us from the sea for the past twenty minutes. I wondered if there really was a beach or a sea nearby. This tall gray shield represents the citizens’ fear. Sometimes it does worry me thinking about a situation where a big tsunami comes again to Ishinomaki, but now everyone is more prepared. Big evacuation routes are posted all around the roads, emergency staircases are constructed for people to climb, and my grandma has an emergency kit loaded in the car.

I was too young back in 2011, to understand the devastation; and even those stories seemed so far from reality. But I know what was before this reconstruction, before the disaster, and I can see that these new roads will lead us in the right direction.