Animal cafes: what you should and shouldn’t find 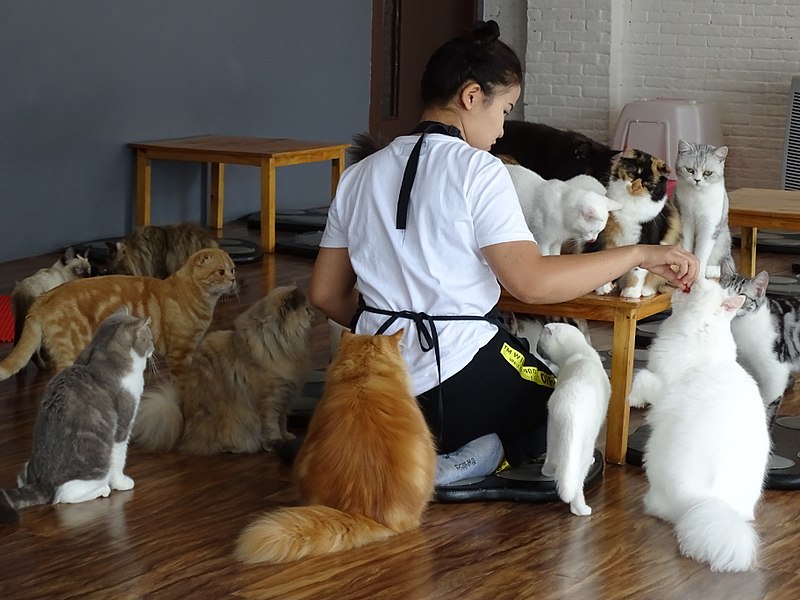 An employee feeds the cats of an overcrowded cat cafe in Thailand.

Originating in Thailand then spreading to Japan in the early 2000s, animal cafes have taken over the world by storm but sadly, some of these animal cafes are guilty of neglecting the needs of their animals in the search for higher profits, or because they have not taken the time or money to uphold the needs of their animals as they should. In order to protect these animals, it is important to look out for signs of neglect when visiting animal cafes.
If visiting an animal cafe, you should look for these signs:
If the cafe houses any animal besides dogs or cats, the cafe is exploiting and neglecting the needs of those animals, as they are not suited for animal cafe environments. For example, owl cafes, hedgehog cafes, or rabbit cafes.

Aspects of the cafe facility that may signal neglect

Animals do not have access to clean water at all times
There are no places, for instance, cat towers, for animals to escape to when they need a break away from customers.
The cafe room is not large enough for the animals to move around and play in comfortably.

Aspects of cafe management that may signal neglectful care

There is no limit to how many customers can enter the cafe, so the cafe is allowed to become crowded with people as well as animals.
Customers are allowed to annoy and harass the animals or bother them while they’re sleeping.
The cafe does not take measures to protect their animals from infection. Customers should be made to wash their hands before going in, and some animal cafes make customers change their socks.
For animal cafes that sell their animals: the adoption process does not thoroughly investigate the adopters. One way to investigate this is by acting as a possible adopter, then analyzing the adoption process for yourself.

The animals are very skinny and don’t look like they’ve been fed regularly.
The fur of the animals is dirty or matted.
There is mucus in the animal’s eyes.
In cat cafes: the long-haired cats are coughing up a lot of hairballs.
In dog cafes: the nails of the dogs are unusually long.

Signs that may suggest an animal is stressed and therefore neglected

How to Take Action Against Abusive Animal Cafes

Local authorities should be notified about animal cafes that are clearly neglectful and break animal protection laws of the area. For instance, if the animals are clearly malnourished or physically abused. On the other hand, if the abuse is subtler, such as the animals being mentally rather than physically stressed, then contacting authorities may not actually do much to help them. For animal cafes where abuse is more likely to be overlooked, like hedgehog cafes, we should rely more on public pressure than on the authorities. In addition to contacting the police, writing reviews highlighting abuse on Google Reviews or TripAdvisor (after visiting the cafe), or by similarly educating others about how neglectful animal cafes can be, can create a greater impact.