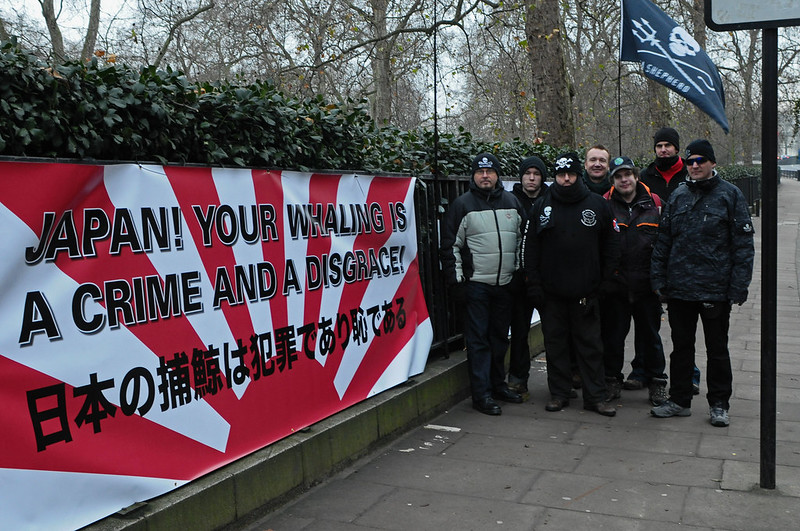 A Sea Shepherd protest against whaling in front of a Japanese embassy in London in 2010.

Every year, starting from the beginning of September until March, the annual Taiji dolphin hunt takes place in Taiji-cho, Wakayama prefecture. The dolphin hunt is carried out by local fishermen of Taiji-cho who hunt multiple species of dolphins and a few smaller species of whales following a set government quota. The 2019 quota amounts to 1,749 cetaceans, of which 1,399 are dolphins of six different species, and 350 are whales of three different species.

To capture the dolphins, the fishermen use a method that involves herding them into a small cove to be captured or killed, achieved by strategically positioning themselves in 12 boats and hitting submerged steel rods to create a barrier of sound underwater. To escape the sound, the dolphins swim towards the shore, and the fishermen then herd them into the cove. Prime dolphins are selected to be sold to aquariums, and the rest are slaughtered for meat.

The dolphin hunt has received much publicity for its controversial nature over the years, drawing international attention. Activist groups such as Sea Shepherd have made vocal their opinions on social media and protested at their hunts.

Regarding the opposition to the dolphin drive, Kazutaga Sangen, Taiji’s mayor, responded in a 2017 interview with The Guardian that, “By killing dolphins and other small whales, fishermen are continuing a tradition that enabled their ancestors to survive before the days of mass transport and the availability of other sources of nutrition.” Sangen also added that the dolphins are seen as a “vital source of food.”

Some anti-hunt activists such as the International Marine Mammal Project of Earth Island Institute have asked for a ban on all dolphin and whale products in the 2020 Olympics. On their website, they argue, “The Olympics are about fair play and international cooperation,” and that “the Japanese hunters’ ways of killing these intelligent, social animals is anything but fair.”  However, if this ban is to be made, it makes no sense to exclude other livestock killed for food, as they are also killed in ways that are anything but fair.

These animals – cows, sheep, pigs, and other livestock are all subject to the same painful death these anti-hunt activists are so against. Despite laws put in place such as the Humane Slaughter Act that make stunning livestock before their slaughter mandatory, these laws are frequently not abided by, as incompetent workers can fail to properly render animals unconscious before killing them. It seems to the anti-hunt activists that because the killing of livestock is widely accepted, it is not as pressing an issue compared to dolphin and whale hunting. In that sense, they are only criticizing the killing of dolphins or whales for food because of cultural differences.

A more valid reason to put a stop to the dolphin hunt would be the health issues associated with dolphin meat. A major concern of the anti-hunters has not only been about the welfare of the dolphins and whales but also about the mercury levels of the dolphin and whale meat being sold in local Taiji markets.

Wakayama prefecture, in which Taiji-cho is situated, has responded to the controversy on their official webpage, claiming that despite the relatively high levels of mercury in dolphins compared to smaller marine animals, it is not enough to cause severe damage to health. In other words, they claim that the mercury levels have not been shown to have negative effects within several days of consumption. However, in a 2007 article by the Japan Times, Taiji-cho’s own assemblymen confirmed the presence of dangerously high levels of mercury in dolphin meat.

The two assemblymen purchased random samples of meat from pilot dolphins caught in the Taiji dolphin hunt and sold in their local supermarkets to test. The results revealed that some of the samples contained 10, 12, 16 times more mercury than the health ministry’s advisory level for mercury of 0.4 ppm and 0.3 ppm for methylmercury.

What’s more, this dolphin meat is being increasingly served at elementary schools of Wakayama prefecture, which could be causing serious detrimental effects to their children. When this finding was reported to the Wakayama health department, their response was that they did not want to upset the Taiji people, and no solutions were made or even proposed.

Although the consumption of dolphin and whale meat due to tradition is defensible as long as beef and pork continue to be consumed in other cultures, the serving of dolphin or whale meat when there are health risks should in no way be allowed to continue.

Mitsunori Kobata, president of Taiji’s dolphin-hunting association, said in an interview with The Guardian, “Of course, there are lots of other sources of protein around these days, but people of my generation and older still have the right to eat whale if we want to.” If it is an ethical matter, then the only person who could rightfully blame them for eating whale meat would be someone who does not support the killing of normal livestock either. The disregard, however, of health problems related to dolphin and whale meat, is something everyone can agree is incorrect.

According to The Guardian, Kazutaga Sangen also stated that the dolphin drive hunt was an essential component of Taiji’s economy, as the profit made from selling the dolphins to aquariums supports everything from their “services for elderly residents to education and tourist infrastructure.”

The truth about the hunt is that most of the money made from it is not by selling the meat — the income the fishermen gain from one dolphin’s meat is 500 to 600 dollars, while a trained dolphin sold to an aquarium could earn up to 150,000 dollars, or even more if the hunters are selling the dolphin to an aquarium overseas.

If this is the case, then the true culprit in this situation is the aquariums buying these dolphins from the hunt to supply their exhibits. The fishermen are simply responding to a demand they see a profit in. The dolphin hunt may be part of their tradition, and the meat a part of their culture, but if this were not a profitable business, then dolphin drive would very likely not continue today.

The anti-hunt organizations protest the continuation of the hunt, but the cultural controversy that stems from this draws the attention away from what they should be spreading more awareness of instead, which is where the dolphins are going: the entertainment industry. If their goal is to put an end to the hunts, they should focus on putting an end to the demand for them.

Even if the hunts were successfully banned, if the issue of rampant dolphin trade isn’t addressed, then these aquariums will simply find other ways to acquire dolphins. If not Japan, places like Malaita in the Solomon Islands that also pursue dolphin drive hunting and, despite a ban in 2012, still illegally sell dolphins to international aquariums.

The Taiji dolphin hunt is controversial because of cultural differences and contradicting perspectives, making it difficult to fully agree with solely one side. However, as long as the facts are not ignored, they can provide a middle ground between the two sides to find a compromise.

Dolphin meat is not safe for consumption, and dolphin drive hunts and trade remain profitable because of a demand from aquariums worldwide.