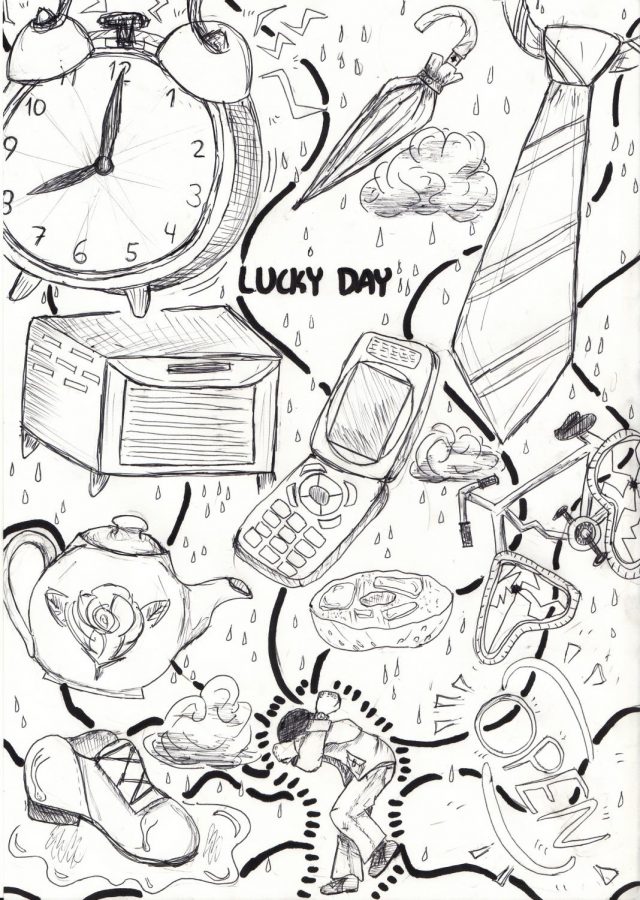 The alarm on my bedside table had gone off at 6:00, and I did actually look at it, but my soft covers and comfortable bed overwhelmed my will to move, so I promptly went back to sleep. My alarm was still blaring when I groggily awoke the second time, and the clock reading 8:00.

With a striking fear I leaped out of bed and onto the cold floorboards, running this way and that across my small house, desperately trying to get ready. I dressed as quickly as I could, trying to do my tie right, but repeatedly strangling myself instead. It always astounds me how when you need to be fast, you end up taking more time fumbling around like a fish on dry land.

In my haste, I burnt my hand grabbing a bagel out of the toaster oven, and while buttering it, dropped the bagel on the ground. Bottoms up. Just my luck. Now I had to clean the floor! By the time I was out the door it was already 8:45. When I hopped onto my bike and took a sip of my mugged tea; I found I had forgotten the milk and sugar! But I was already biking away from 23 Tawney Street, North Court Oxford.

It was a small brick house with two bedrooms, one bathroom, a kitchen, and a lounge. I, at the age of 27, was still living in my parents’ house. I was unemployed, so I was desperately trying to nab a job interview at a fax company in Abingdon, — not exactly close.

I rode an old bike to get around —a hand-me-down from my mother. I couldn’t begin to afford anything motorized. It was rusty red with chipped paint, and the handlebar leather had been worn away where I put my fingers. It had no kickstand, no gears, and a seat constructed out of cement, figuratively speaking. If I were to ride my artifact on a newly paved road, it would make a noise similar to gravel in a laundry machine. But despite all this, I learned to love my only means of transportation.

I flew onto Stone Street and whipped around Morrell Avenue, jamming my tea mug into the makeshift bottle holder on the down tube, splashing some of it onto the ground as I almost ran into the curb trying to pull out my phone.

At each intersection, I continued to punch in the front desk number for the fax company. I turned onto a street with an ancient church on the corner, where I saw two women (one wearing a blinding neon yellow shirt) and a man, all with American accents, pull out their cameras and start taking pictures of me. This was oddly common around North Court, because there were a lot of old buildings and tourists tended to come here to look and the architecture and the inhabitants. Visitors often made me feel like an exotic animal on display, living in its brick jungle.

Still frazzled by the neon shirt, I forgot to type in a number at the next intersection. In frustration, I realized that I had wasted precious time waiting at the crossroads. I violently shut my flip phone and shoved it back into my pocket, continuing on my journey.

I was two-thirds of my way to 109 Ock Street when it started raining. There was no warning, as usual. One minute it was dry, then it wasn’t. You’ve got to love UK weather. The downpour was so heavy that even if you had an umbrella and wellies, the rain would bounce off the ground and splash onto your legs. I had neither an umbrella, a raincoat, nor a pair of wellingtons.

I pulled to the side of the cracked road, seeking shelter under the striped blue and white canopy of ‘Phil’s Grocery Store.’ The shop was colorfully lit with neon signs, reminding me of the neon-shirted lady. I locked up my bike and removed my mug from the cup holder.

In the act of rushing under the canopy, I took a closer inspection of the store. The bricks of the foundation were starting to crumble, and they had a brownish tint. The shelves were sparsely stocked, with off-brand items like Hog’sNobs and Wakers Chips. The young man, a teenager, at the counter seemed to be sleeping. As I walked through the door, a shrieking jingle went off, arousing the cashier from his slumber.

“Hello! What can I do for you?” he said in a forced chipper voice, trying to shake off his grogginess.

“Oh, I was wondering if you could possibly call up a cab for me?” I responded. The cashier nodded in reply, clumsily retrieving the phone and dialing a number. The telephone only rang once before it was answered by a voice on the other end.

“Hello Mr. Thomas!” said the cashier. “Yes, my father’s fine, but could you please come down to the store with your cab, a fellow got caught in the rain… eight minutes? Sounds good!” The cashier then clicked the phone back into its place and turned to me. “Mr. Thomas will be here with your cab in eight minutes.” Perfect, now all I had to do is wait.

To pass the time, I tried to make small talk with the young man, but he only ever replied with one or two-word statements. Finally, I got him to elaborate when I asked him, “Do you know Mr. Thomas well?”

The cashier informed me that he was a family friend who worked many part-time jobs, one of them being a cabbie, and often came over to help with work. After this transaction, the young man walked into the employees’ backroom, implying he didn’t want any more chitchat.

I decided to go outside to wait for the cab, but just as I opened the door a drenched man in a suit and boffin hat barreled into me, mumbling a hasty, “‘Scuse me,” as he pushed past.

Looking back, I saw that he was calling for the cashier, and dripping all over the floor. I continued through the doorway, just in time to see a yellow-and-black cab swerve around the corner. I waved it down and it screeched to a halt in front of me, but just before I reached the door handle, the drenched man ran up and grabbed it!

Mumbling between gasps from his desperate dash to the cab, he managed to say,

“Sorry. Late for work. Very important,” and coughed once before slamming the door in my face!

I yelled at the man to open the door. This was my cab! But he didn’t listen, and Mr. Thomas drove away.

Rushing back into the store, I yelled aggressively, “That man just took my cab!” The cashier muttered a few words about being sorry, but that I’d have to wait until Mr. Thomas came back. He called him up again and told him to come back to the store after he dropped off the drenched man.

I yelled at the ceiling in frustration and started pacing the aisles. Scowling at the items on the shelves, but not really noticing what they were. After what seemed like hours, the cabbie pulled up again. Not bothering to say ‘Thank You’ to the cashier, I ran out the door again and hopped into the cab. The inside was warm and stuffy, with the upholstery a mottled gray and shades of brown. Once in the cab, I took a better look at the cabbie. Mr. Thomas’s hair was brown, with streaks of white and gray in his matted beard and mustache. His clothing was casual, a blue tee-shirt and baggy trousers.

He asked, “Where to?” with a deep husky accent.

“Why, yes?” I responded, a little confused. He laughed again and started driving.

The cabbie swerved around cars and through red lights. I tried to relax into the unsettlingly squishy seats, but I ended up banging my head against the window as we made sharp turns. I was dizzy with stress and to calm myself I contemplated my shoes — sopping wet and stepping on something that looked like it may have once been edible.

Finally, we pulled up to the faxing company warehouse. I threw my fare at Mr. Thomas, and rushed out of the cab, trying to run in a straight line. I bolted through the double doors to the building, and ambled up to the receptionist’s desk, combing my hair back with my fingers to try and look composed.

The receptionist greeted me with a “Hello! What can I do for you?” and a judging look.

“I’m here for my interview with Mr. Jones.” The receptionist looked down at her computer and typed in a few keys, and then looked up with an unimpressed look on her face.

“That was forty-five minutes ago,” she said, gesturing at the clock on the wall. I started to panic.

“Well can he still take me?”

“Well, in fact, he can. He only just came in twenty minutes ago. He is waiting for you in room 22, floor three.” I sighed in relief and walked for what felt like the first time today up the stairs and around the corner, approaching all the 20-30 numbered offices. I found 22 and gave it two sharp nocks.

A gruff voice from inside husked, “You may come in.”

I opened the door and there, behind a messy desk, sat the drenched man.

As I entered the room I gawked at the drenched man sitting in front of me. We both stared at each other for a few seconds as recollection slowly dawned on our faces.

Suddenly, Mr. Jones started to laugh. It was a deep guffawing laugh, which ended up making me laugh too, though nervously.

“I’m ashamed to say that I am, but in my defense, I didn’t know you were, well, you.” We laughed uncomfortably again at the coincidental situation we found ourselves in. He said,

“Well I’m awfully sorry for taking your cab from you lad, I hope you’ll forgive me?”

“Will you hire me if I do?” I asked jokingly.

He clapped once, so loudly I jumped a little, and then rubbed his hands together like someone closing a business deal.