Interview with a children’s book author and illustrator: Marissa Moss 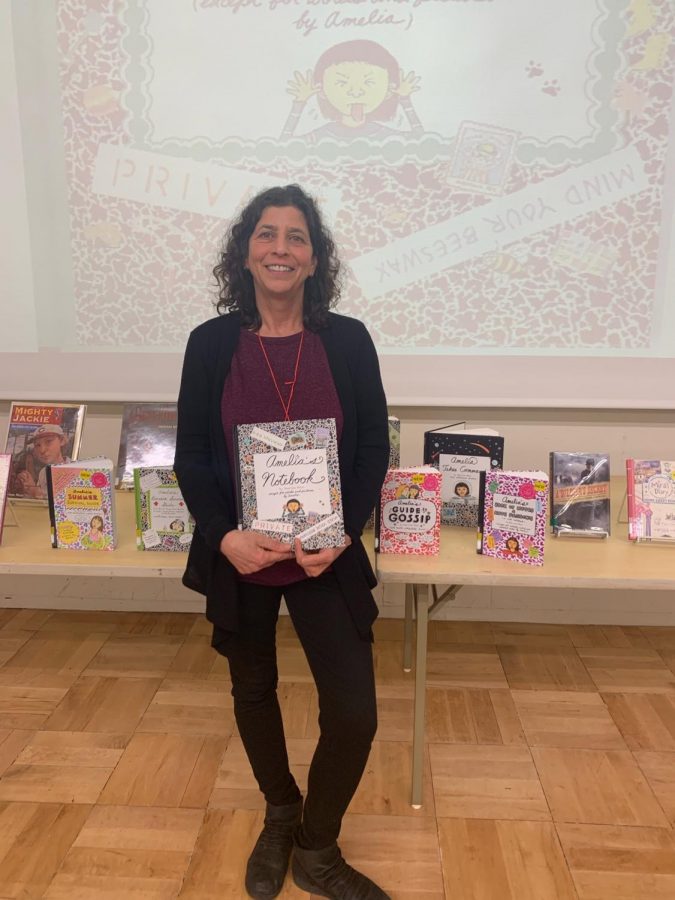 American children’s book author and illustrator Marissa Moss visited ISSH in February to give talks to students from junior school through high school, about her work and what it’s like being an author. Marissa Moss has written and published more than seventy books, her first and most well-known series being “Amelia’s Notebook”, a set of journal-style books following the character Amelia, as she traverses school, family and friendship. In addition to children’s fiction writing, Ms. Moss has also published books about history, such as “Barbed Wire Baseball” about Japanese-Americans playing baseball in American World War Two internment camps. She has also published novels such as “Caravaggio: Painter on the Run”, and a graphic novel, “Last Things: a Graphic Memoir About ALS”, documenting Marissa Moss and her children’s experiences when her husband was diagnosed with ALS. The following is an interview with renowned author Marissa Moss:

What was it like when you were first sending out stories to publishers?

“When I started out it took me five years to get my first book published. It took five years of sending stories in to publishers and getting them rejected and revising them and sending them back and getting them rejected and revising them again and if I had given up in year four, or year four and a half, I would still be waiting tables. Which is what I was doing while I was waiting to get published. I was a waitress. So it shows you have to have a lot of determination and just be willing to work and rework and rework until you get things right.”

Where do you get all your ideas?

“There’s no problem getting ideas, there are a million ideas. A lot of Amelia books are based on me when I was a kid. This new series that I’m starting, “Make it Count! Rachel’s Notebook of Observations, Deductions, Clues, and Secret Codes.”, is like Amelia in that it’s a notebook about a girl who is a mathlete because I was a mathlete, and I was the only girl on an all-boy team and it was very uncomfortable so I quit! Because I felt so uncomfortable! I was already a weird kid and that was just a weird too far! I just couldn’t take it. What I often do in my books is repair the mistakes I made when I was a kid, so I have her not quit, or she does quit but she founds her own team of girls — a girl mathlete team. And I wish I had done that! But I didn’t have the courage to do that when I was a kid.”

How would you describe your relationship with drawing and art?

“I don’t do the words, and then do the pictures, I do them together because that’s how I think. I have to do them both together because part of my thinking is visual. You’re not just thinking in words, you’re thinking in images, and images tell a lot of the story. When you have a picture book or graphic novel, the art isn’t echoing exactly what the words say, it’s adding to, expanding upon, doing something bigger and different. You can’t just look at the art and get the story, you can’t just read the words and get the story, you have to have both together. Because they’re each bringing something. For a really good picture book or a really good graphic novel, that’s the case. I can’t really slice the two apart.”

What do you love about writing?

“I think writing is magical. Really powerful, because you can make things happen in a book that you can’t in real life. When I was a little kid, I was very skinny and small and I had asthma, so I couldn’t do P.E. or anything fun, and I felt very powerless. But in my stories, I could be Wonder Woman! You know, I could be incredibly powerful. I would tell stories to my siblings, my brothers and sisters, and I could make characters that were clearly them but changed a little bit, and something horrible would happen to their character and they would be totally upset! I felt such power that I had their emotions in my hand, you know which in storytelling you do. You have your listener’s emotions. You’re in their head and in their heart. I get fan letters from people who read Amelia’s notebook, and people who are young women now who read Amelia when they were girls and who now are writers themselves or artists or designers and that is the most validating message I can get that I made a difference in someone’s life like that. It’s what you hope for. Writing has that! You can reach people in a way that you don’t realize. You can really change people — in a good way. “

In 2017, Marissa Moss published the adult graphic memoir, “Last Things: a Graphic Memoir About ALS”. A powerful story about grief, loss, and family where Moss recounts the time her husband was diagnosed with and was lost to ALS, a progressive illness affecting the nervous system.

It must have been incredibly difficult to revisit those memories. What was it that helped you keep writing?

“I actually started writing it a couple of weeks before Harvey died, the ALS was seven months from diagnosis to death which is extraordinarily fast. And it was only two months before he needed to go in the ventilator which changed everything. I had a friend who was a writer, and I told her what I was going through, and she ran a writing class in her home, and she said, “You need to come take my class and start writing about what is happening because it will help you deal with this.” So I agreed, and then what happened was Harvey died so quickly, he died right before class started, but I went to the class anyway and started writing about what had happened. To just sort through, because it was so fast that you’re in survival mode. It’s like being in a warzone. You don’t know what’s going on, and I needed the writing to help me find, “What was it that just happened?””

What advice do you have for some of our young writers and illustrators here at ISSH?

“One is just you have to be stubborn and determined. You have to be willing to revise. I think a lot of people don’t want to revise, but things can always be improved. Like you know when someone gives you criticism, sometimes it’s wrong but sometimes it’s right? And you know it in your gut when it’s right. You just have to be open to revision because that’s how you get better stories. Noone writes anything perfectly the first time — that’s just impossible. It’s not the nature of writing because writing is messy. If you want to be creative, you have to let yourself be messy and make mistakes. If you’re worried about making mistakes, and you’re so tense and tied up, you can’t do anything. So you have to just let yourself be messy and make mistakes and be creative and then it doesn’t matter because you’re just gonna revise, revise, revise and just keep going. And if you really want it, you will get published. You just have to be stubborn and willing to work hard.

To put yourself out there you also have to have a really thick skin because people are gonna reject you. I have a shoebox full of rejections, and I think someday I’ll wallpaper a bathroom with them or something, but I think it’s a good reminder that that’s how you get better because people say no and then you get better. And then they say no, and then you make it better, until they say yes.”

As ISSH is an all-girls school, as a successful woman, what advice do you have for our students here?

“I think girls and women in general have a hard time acknowledging their own value. So you have to know your own value, and demand respect for it and like I said before, if you don’t take yourself seriously, no one else is going to take you seriously, and I think that is especially true for girls and women. We tend to internalize, and also we have this horrible need to please, so don’t have this horrible need to please. I have learned you have to put your foot down for what you deserve, and take yourself seriously and know your own value, and then other people will. But if you don’t, because women get paid less, and in children’s books they get reviewed less, they get fewer awards. Things won’t change until we make it clear it’s not okay.

I hope I can encourage girls to speak out and to work for themselves. Because they deserve it!”