A road divided: Fukushima’s recovery from the 2011 Tōhoku earthquake 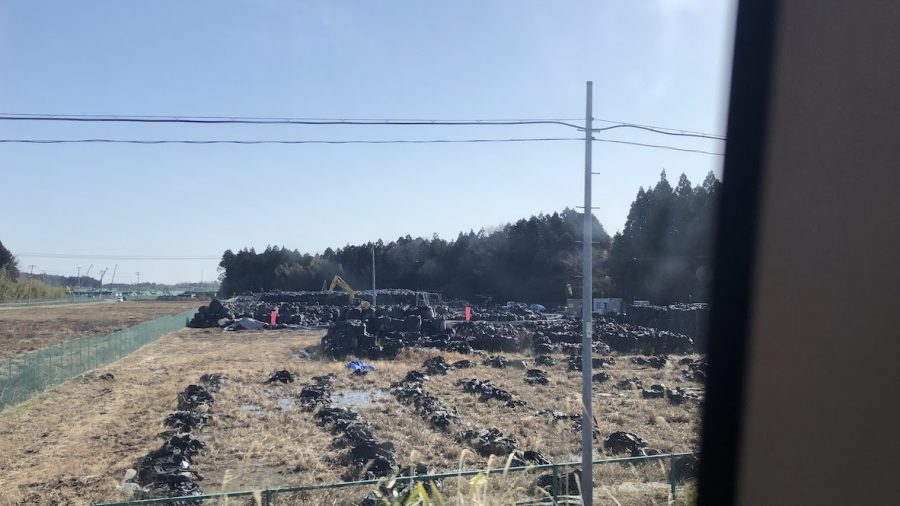 The road cut through the neighborhood, dividing it — the right was lined with barricaded houses, while on the left, just a couple meters apart, showed a typical row of homes. According to Sister Masako Egawa, who led the tour along the coast of Fukushima, our van was traveling down the middle of two zones: the red zone, which residents are banned from returning to, and the green zone. I was struck by the tremendous difference between the two zones, separated only by a few steps.

As a trip organized by the Social Service Council, a few members participated in a trip to Fukushima to see firsthand the effects of the 2011 Tōhoku earthquake on the region, as well as to volunteer at the Sayuri kindergarten in Minamisoma. Kindly accommodated by Caritas, we had the chance to take a tour along the coast of Fukushima to see the areas impacted by the earthquake, tsunami, and nuclear disaster.

Everywhere around us we saw the efforts of reconstruction and revitalization. We passed by rows upon rows of solar panels, and workers shoveling contaminated dirt into black plastic bags, stacked into loading trucks and covered in a green tarp. Even now, nine years later, the effects of the earthquake and the subsequent tsunami and nuclear meltdown are in the process of being reversed. Yet one thing is clear — the mark of the disaster on the survivors of 2011 Tōhoku Earthquake remains.

As we entered areas that were directly impacted by the earthquake and tsunami, we saw malls, ripped down to their steel skeletons. Desolate and untouched, they are proof of what people have forgotten in past years: Fukushima is still in the process of recovery. There is still progress to be made. The desire to be seen was made evident as we passed a makeshift shack on the side of the road, with the words seijika no ie, or “politician’s house” painted boldly above the entrance. Sister Egawa told us it is symbolic of the people’s open invitation to the politicians willing to come to see the state of the affected areas.

Every day presents new hurdles in the process of recovery. Weather, or even a change in the direction of the wind, can cause radioactive material that would normally be blown out to sea to rain back down onto the coastal region. The five centimeters of topsoil that absorb the radioactive material must then be shoveled off and leveled once again to reduce the radiation levels. When slight changes in conditions can mean hours of work to counteract the new damage, rebuilding is, to say the least, incredibly difficult.

With such challenges surrounding the maintenance and reconstruction of the prefecture, there is a need for volunteer workers as well as government funding to continue the ongoing recovery. As the years pass, however, media coverage on Fukushima’s state has decreased, and the 2011 Tōhoku earthquake has faded from many people’s minds. And as construction and renovation for the Olympics takes place in Fukushima, many residents feel as though government priorities have shifted from reconstruction to renovation and revamping of the area, spending resources and funding repair for aesthetic purposes.

According to an article by The Mainichi, so far, the government has funneled 34.6 trillion yen into the reconstruction of Fukushima, but with many places like Futaba and Namie still recovering and the decommissioning of the Fukushima power plant estimated to cost around 8 trillion yen, the upwards of 23.69 million yen the Japanese Board of Audit claims is being spent for Olympic renovations in the Fukushima prefecture could be being used to aid its recovery.

When we stopped to visit the TEPCO decommissioning archive center, Sister Masako Egawa pointed out that unrest with how reconstruction is being addressed by TEPCO, as well, has been criticized. The TEPCO archive center is a large building full of exhibitions on the decommissioning process of the nuclear power plant, complete with a theatre that shows, through a short movie, the events of March 11th. Though it attempts to show the seriousness with which TEPCO is moving forward with the decommissioning process, according to Sister Masako Egawa, some residents of the area have expressed discontent at the fact that TEPCO seems to have focused on erecting an archive center when the nuclear power plant is still in the process of being decontaminated and decommissioned.

Nine years after the 2011 Tōhoku Earthquake, some areas of Fukushima have been declared safe to return to, but this can be misinterpreted as a sign of a completely recovered region. In addition, despite its ongoing recovery, there is a serious lack of urgency that is felt when it comes to the way the government is approaching the reconstruction of Fukushima. Then again, describing the area as uninhabitable would be incorrect as well, and to do so would be to cause unnecessary anxiety to current residents and to undermine how far Fukushima has come since the initial disaster.

However, we must remember that much progress does not always mean that there is not more to be made.