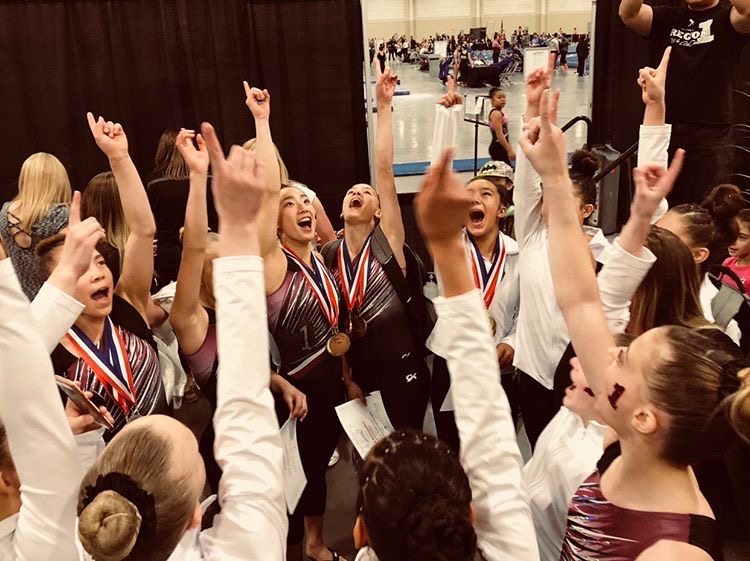 “I started gymnastics when I was four. When I was in second grade, they bumped me up to an actual level, and into a team. This is when I got really inspired because I was always the last to learn skills. I’m the one that perfects them, but always the last person to learn them. So I thought, “Wow, I am allowed to be in a team… I’m developing skills.” That’s when I thought, “This is what I want to do.” Right now I’m in level 10, (which is the highest level in America), and I’m also at the top level in Japan.

I think I have two highlights of my gymnastics career. One was two years ago, when I competed in the Level 9 Westerns [Gymnastics Championship]. I won first place in the All-Around, and that was a really big achievement for me, just because it was so stressful. Another pretty insane thing to me is that I competed in the All-Japan Junior when I came here, so it’s like a national competition. I just thought it was insane, because I’ve never lived in Japan, and had never competed anywhere other than the U.S., so the fact that I came here, trained for the first two months, then competed in an actual arena was so crazy.

One of my most challenging moments actually happened very recently. Once I fractured my ankles in freshman year, I actually took a few months off. I then came to Japan sophomore year, and had to train the first Monday that I arrived, because I had to compete two months later. I was shocked, because I didn’t even have my leotards or anything, and I was like, I need to train in a shirt, first of all, and on top of that my ankle was hurting, and I had no skills, because I hadn’t been training for six months. Thankfully, I got back to it, though. But it was really scary because here, in Japan, unlike in the U.S., it felt like the team was counting on me, so it was really stressful. Even though in the U.S. we were a ‘team,’ it was just because we were from the same gym. It was more individual work.

When I moved to Japan, one of the main things that changed was my training schedule. I went from four days a week, 4 1/2 hours of training to six days a week, 3 1/2 to 4 hours of training. I try to go to the gym right after school, since it starts at 5:00 p.m., and ends at 9:30 p.m.. Then I get home by 10:00 p.m., and usually start homework at like, 10:30 p.m. which is not bad. I mean, I’ve done it since second grade but it’s still hard because it is 6 days a week now, and as I get older I feel like it’s more tiring, and I get more sleepy during the day. Thankfully, though, my gym is really relaxed about letting us study, since they want us to be educated, so they’re ok with me coming in later or leaving early to study, but I try to study before practice. If I can’t finish my work, though, then I just stay up late.

Honestly, I wouldn’t want to continue doing gymnastics in college if I’m staying here… because it’s just super intense and there’s an insane training schedule. Even though I feel like I would have more opportunities [in Japan], in the U.S., it’s a lot more fun, less stress on your body, and it’s a lot more of a team effort. Everybody is super happy, and everybody comes to competitions, so if I were to get a scholarship in the U.S., I would definitely go back and train there.

This is really cliché, but my biggest inspirations are my parents and my friends. This is mainly because in sports you get down really easily, and I feel like every time I am down, my parents always help me get out of that slump. Also, seeing my friends doing sports and other activities helps me stay inspired to continue, even if it’s a little hard.

What motivates me the most is my coaches, and what they have to say about me. As an athlete, having someone glorify you, especially when it’s your coaches, feels like a big accomplishment. All of my coaches back in America were also like that but here, they tell me all these things like, “Oh, you have so much potential” or “If you do this routine solidly, you can really go to the All Japan Competition for beam.” Telling me that also makes me motivated to keep going.

COVID-19 has 100% impacted my gymnastics career. I actually almost quit gymnastics literally right before corona happened. I was having a really big slump and it was just really bad. I didn’t want to go to practice anymore and last year was my first year at this school, and with all the new classes, and the three sciences it was just so stressful on my brain and everything. So, I already took a few months off and I was planning on quitting, but then because of COVID, I was like: “Ok, wait, since everyone is taking a break, everybody’s going to start fresh and I’m really missing it now.” So these last few months helped me figure out that I still have a passion for gymnastics.

My upcoming competitions got canceled. I don’t think there’s going to be an actual competition until next year, so it is disappointing, but I’ll be more prepared.

Gymnastics keeps me focused when I’m doing it. Because you have to stay so focused and tight all the time if I think about even one thing, like, about school, then I completely get off track. So, I’d say gymnastics is actually therapeutic sometimes. If I have a test, then I don’t have to think about it during practice.

I definitely think gymnastics helped me become mentally stronger. I need to have discipline because especially after corona started, I realized that I have so much potential and I’m doing so well but when there’s a little slump, then I can’t just run away. I realized that you need to have discipline and continue, and get over that slump so that you can keep going, and you will do even better than before.” — Kanna