Jandy Nelson’s ‘I’ll Give You the Sun’ 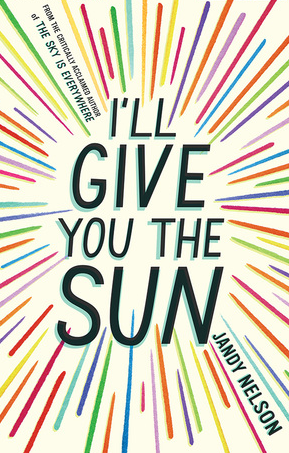 “Maybe some people are just meant to be in the same story.”

The stories of twins Noah and Jude are destined to be intertwined. “I’ll Give You the Sun” by Jandy Nelson follows the breathtaking accounts of their teenage years: insecurity over sexuality, hope through dreams of art school, yearning with love and heartbreak, grief over divorce, and regret over death.

With an unconventional upbringing by a stoic pathology professor as father and eccentric art professor as mother, twins Noah and Jude were inseparable: seen shoulder-to-shoulder since the first ultrasound photo, they dubbed each other as NoahandJude.

At thirteen, oddball Noah mind-paints the world around him and falls in love with the fascinating boy next door; brazen Jude wears neon bikinis and dives off cliffs just for the thrill of it. Noah is Mom’s favorite, Jude is Dad’s; vibrant and captivating personalities define each twin and their different teenage stories.

Flashforward three years later, 16-year-old Noah has destroyed all his art and Jude hides under oversized hoodies. Their distinctive characters have completely diminished: flirtatious Jude now sculpts solo at an art college while the introverted Noah goes to public school parties. What exactly happened in the three years between which shattered Noah and Jude? The journey to find this answer makes this book so cryptic yet fascinating to read.

Conventional books have a linear and chronological storyline. “I’ll Give You the Sun” breaks apart from the norm as we jump in time between 13-year old Noah and 16-year old Jude. As readers, we experience the delight of slowly watching as the two separate lives intersect and overlap as Jandy Nelson manipulates the story’s time frame to make readers piece together evidence themselves. It’s a novel that cannot be skimmed but read with careful inspection.

Many classify “I’ll Give You the Sun” as a teenage romance novel. I disagree. This title dismisses the book as an angsty, teenage-love novel made for amusement. To me, the story of Noah and Jude resembles a poetic coming-of-age novel rather than a light read for an average 14-year old. Especially through the perspective of young, passionate, and queer Noah, every word and metaphor holds so much emotion that I take breaks in between to fully process what just happened in a single page.

Jandy Nelson’s portrayal of Noah’s homosexuality captures the experience of a gay male teenager from a first-person perspective. Reading Noah’s story gave insight into what exactly a gay male teenager would experience and the emotions he would have felt. Noah taught my 15-year old self his struggles with the constrictions he faces. As my close friends began to come out as LGBTQ+, reading “I’ll Give You the Sun” helped me to understand their points of view by providing an outlook that I otherwise would not have experienced.

The more times I reread this novel (I’ve lost count of exactly how many times), the more Jandy Nelson’s passionate and vivid prose makes Noah and Jude so real, relatable, and unforgettable. Their personalities are raw and imperfect, their stories perfectly interlaced and captivating, and each read leaves me feeling a little more touched and hopeful.

“I’ll Give You the Sun” has earned a permanent place in my bedside’s bookshelf, and its story is one which many can emphasize with, cry over, and reread.