Debating through the confines of a screen 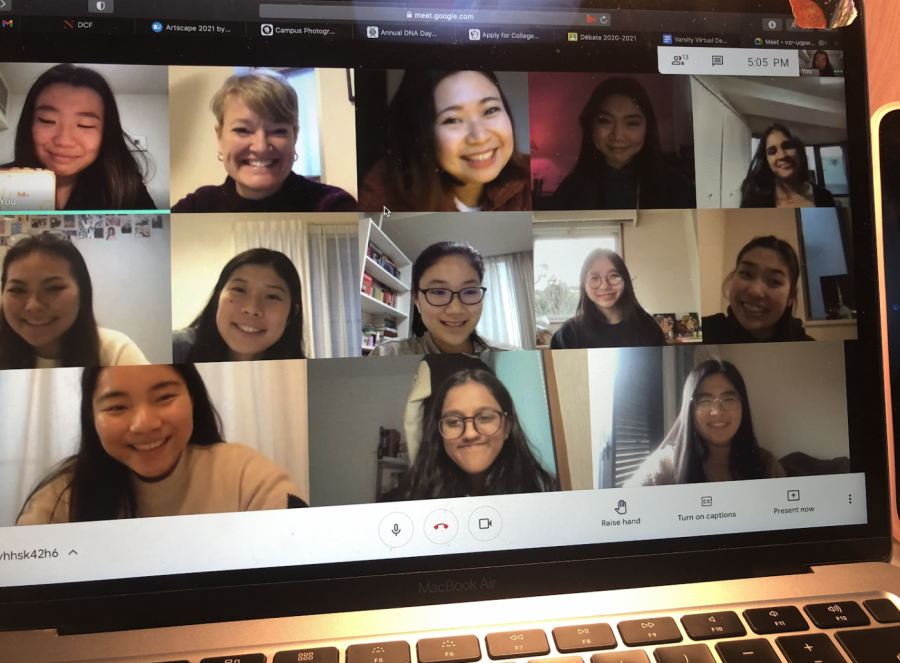 With the Zoom application recording every move and Google documents filling with paragraphs of arguments, the Sacred Heart Varsity Debate Team prepared for an afternoon of virtual, socially-distanced practice debates.

Before COVID-19, the debate team traveled to St. Mary’s on four Wednesday evenings to participate in eight rounds of fully-developed practice debates. Both sides of an engaging motion would be debated with other Kanto Plain teams from schools including ASIJ, St. Mary’s, KIST, and Seisen. These weekly practice debates were the preparation for the grande finale of in-person Varsity and JV Debate Tournaments. However, in the face of the pandemic, the Kanto Plain Debate League shifted completely online. Our weekly Wednesday debates were conducted on Zoom, a format never tried before.

So what were the “hits and misses” of this virtual approach to an interactive public speaking event such as debate?

If anything, moving debate online gave the speakers more time and flexibility. Debate was once a time-consuming event as the physical act of traveling to St. Mary’s took roughly an hour. Once arriving at the host school, the debaters would hurriedly rush to assigned rooms and start debates with little time to calm down. Now, the hour initially spent to travel is used for further preparation and last-minute confirmation with teammates as well as just time to compose ourselves. To lessen the burden of adapting to a completely foreign debate system, the speakers initially only needed to debate just one side of the motion. As the season progressed and speakers became more familiar with this format, the debaters developed enough stamina to debate both sides of the motion. After three virtual practices, the debate team attended the Varsity and JV Tournaments, held on Feb. 12 and 10 respectively. The varsity team placed 3rd collectively, brought home a record-high of 8 speaker awards, and concluded a successful season in an uncertain time.

The adaptation of a virtual debate brought a distinct sense of succinctness. The scurry of which-room-am-I-debating-in-next and time lag between each debate was cut down significantly. To make the transition to virtual as smooth as possible, a step-by-step script was given to timekeepers, and instructions were repeated to speakers and judges alike. With these rules freshly in mind, all participants knew what they had to do and little time was wasted.

However, the “misses” lost when going digital had large impacts on debate.

Public speaking is never just about your speech and rhetoric. A speaker’s body language, voice, and confidence all contribute to create the speaker’s convincing and complete performance. Unfortunately, these qualities are limited in the confined rectangle of a Zoom screen. Technical glitches seem amplified in a debate. The subtle inclinations in voice which emphasize vital words are lost in the glitches of a Macbook’s audio speakers. The strong arm gestures which deliver points to the audience are cropped out of the camera’s window . Points of information (where the opposing team asks mid-speech for clarification or as challenges) feel choppy and awkward due to time lags. Going virtual comes as a detrimental blow to speakers whose strengths lie in presentation and delivery.

Anyone can imagine how different it is to sit alone in your room, debating to a computer instead of an audience. As this year’s debate captain and a debater of four years, I know I speak for the team when I say that the excitement and thrill of in-person debate is lost through the screen. One of the most satisfying and rewarding aspects of debate is its difficulty. Nothing beats butting heads and clashing arguments with the opposing team, soaking up the audience’s reaction, and finishing a long night by celebrating wins and analyzing losses at team dinners. While there are obvious benefits to moving online, debate virtually certainly loses arguably the best aspect of debate: the engagement between speaker, opponent, and audience, and the deserving satisfaction of delivering a public performance.