The story behind the college admissions scandal 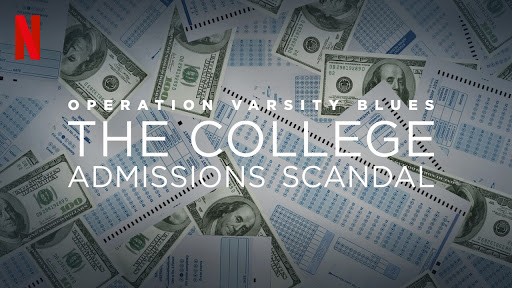 “I know that people that got in are super deserving,” says a girl after being rejected from her dream college, posted on YouTube. Cut to Olivia Jade, an influencer putting on fake eyelashes on her YouTube channel. Daughter of actress Lori Loughlin, known for playing Becky on “Full House”, and fashion designer Mossimo Giannulli, Olivia Jade, and her sister Bella had been accepted to USC – but not through the deserving way of merit and hard work. Instead, their parents took photos of them posing on a rowing machine and sent it to William “Rick” Singer, CEO of “The Key”, a private college counseling company, which secured their spot. This scene, depicted in Netflix’s recent documentary “Operation Varsity Blues: The College Admissions Scandal” is one of the many scenes that sheds light on the biases of college admissions.

Rick Singer, the person behind this operation created a system called the “side-door”, where parents would make “donations” to his foundation, to hide that they were bribe payments. Singer would then take that money and channel it towards various methods of fraud. Some of these included giving money to athletic coaches and administrators to make it look like they were athletic recruits, even if they had never participated in the sport. Others could involve bribing college entrance exam administrators to allow someone else to take, and correct, the exam for the students. From 2011 to 2018, parents paid approximately 25 million dollars in bribes according to the FBI’s affidavit. More than 50 parents and eight institutions were involved in the scandal, including colleges such as the University of Southern California, the University of California – Los Angeles, the University of Texas, Yale, and Stanford.

Netflix’s documentary “Operation Varsity Blues: The College Admissions Scandal” approaches the issue in an intriguing, creative way. Most of the documentary is comprised of reenactments from wiretap transcripts between Singer and the parents, which were released by the US government, with some having been slightly modified for coherence.

The other half of this documentary includes experts who talk in-depth about the entire fraudulent process. This lineup even includes John Vandemoer, a former sailing coach and head coach of the Stanford sailing team, who was involved first-hand in the admissions scandal. You can hear his account of the situation, his relationship with Singer, how he got caught up in Singer’s operation, and the defense of his innocence. You can almost sympathize with Vandemoer through his explanation, as it seemed as if he were slowly tricked into the scam.

On the other hand, the portrayal of Rick Singer will without a doubt infuriate, attracting absolutely no sympathy from the audience. Singer clearly lies and manipulates his clients to get what he wants, and his nonchalant attitude towards the situation is frustrating.

What stood out the most in this documentary were the visuals and the editing. The sequence of events allows the viewer to follow the story’s timeline of how the scandal was executed. One particular shot that stood out the most was the opening scene of the documentary, where there was a montage of people getting accepted to their dream schools, screaming in pure joy. However, once the scandal is unraveled, you see the rejections, students crying, and explaining their feelings about being rejected. It is gut-wrenching to see these reactions, considering the scandal that will inevitably take place, and how deeply the rejected students are affected. Meanwhile, you see people like Olivia Jade openly explaining before the scandal occurred how she doesn’t want to attend college, and only wants to go to the parties, but her parents are making her attend.

In the documentary, Aki Bello, a test prep expert said: “you have predominantly rich families who had every advantage…and yet they still cheated.” Seeing the entire scandal came into play is jaw-dropping; especially the ending, where it shows all the parents, their plea, and sentencing.

“Operation Varsity Blues: The College Admissions Scandal” is a brilliantly executed documentary that not only shows the effect that the scandal had on students but also on the future of college admissions.