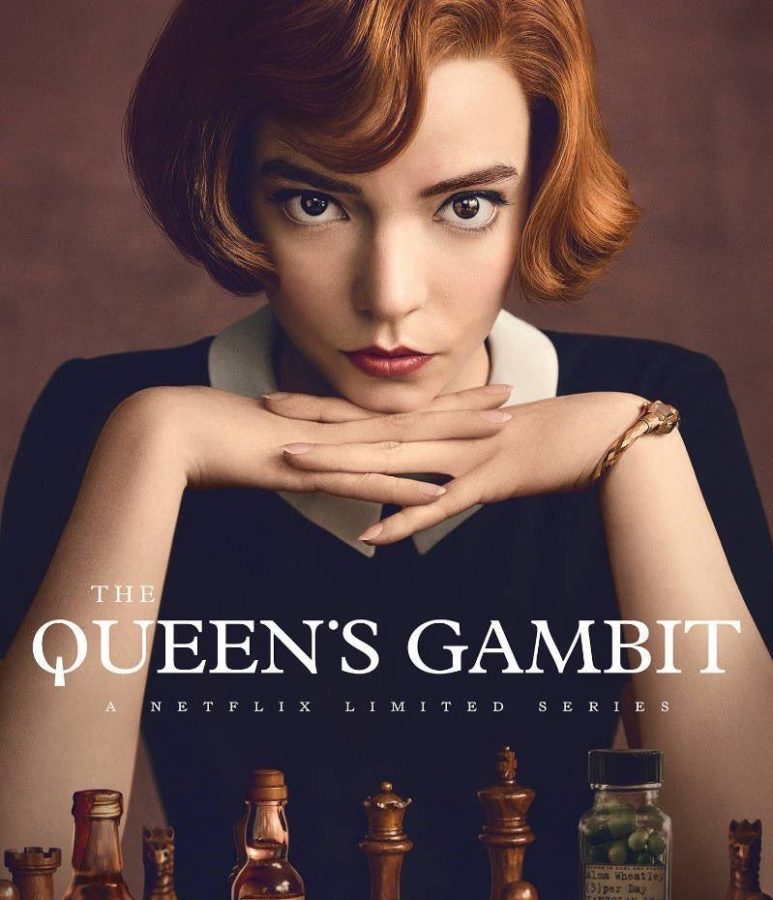 Premiered on Netflix on Oct. 23, 2020, the miniseries “The Queen’s Gambit” quickly rose to popularity, becoming Neftlix’s most viewed scripted miniseries after only four weeks. According to The New York Times, the miniseries even inspired a sudden spike in chess board buyers, increasing sales by 125 percent in the U.S. within weeks of its release. Its immense success can be attributed to the incredible performances of its cast, stunning and atmospheric set design, and enticing plot.

Despite what are, for the most part, stellar reviews, “The Queen’s Gambit” has sparked debate over its representation of mental illness and substance abuse. Set in the 1950s, the series follows chess prodigy Beth Harmon, played by actress Anya Taylor Joy, as she scales the ladder of competitive chess all while battling alcoholism and substance abuse. Some viewers argued that despite Beth Harmon’s episodes of binge drinking and consistent dependence on drugs, the repercussions of such actions were either underrepresented or inaccurate, miraculously resolved after convenient realisations or breakthroughs.

The tortured-genius trope is a trope for a reason – the allure of a character who appears to be perfect and the best in their field, but like all of us, must struggle to get there, is just relatable enough. The plot is centered around the battle between their genius and their inner demons, which is entertaining because in most scenarios, the genius prevails— cue a feel-good montage of the protagonist’s character arc. To a certain extent, it is this character arc and their final success, rather than the realities of mental illness or whatever challenges the character must face, that is prioritized in representation on screen. And to be fair, sometimes the audience just wants to see the underdog win. But, as argued by some viewers, the line between this and the romanticization of mental illness is a thin one— one that is crossed the moment any aspect of the character’s mental illness is portrayed as advantageous to their genius or skill.

At the start, the miniseries seems promising: the audience gets a sneak peak at the true burden of genius as the opening scene shows Beth scrambling to get ready for a chess match she is late for. Surrounded by clothes that lay strewn on the floor, she downs mysterious pills with alcohol, leaving the stranger in her bed to rush to meet her opponent. And as the miniseries takes a turn back to her childhood, Beth’s troubled childhood reveals when her problems with substance abuse first began, making the mental challenges she must overcome more than just a random character trait used to draw the audience in, but a relevant part of who she is.

However, as the rest of the plot unfolds, the story seems to push forth the idea that her substance abuse provides her with miraculous skills that aid her in chess competition; some kind of psychedelic which allows her to visualise the chess board and the moves she must make, or a drug that allows her to tap into her full potential. While this issue is somewhat addressed later in the plot as she slowly comes upon the realisation that she does not need them in order to succeed, the initial representation is still troubling and potentially harmful. Her alcoholism, too, while shown to be detrimental to her social life as she temporarily cuts off all ties to friends and family in a binge drinking episode, seems to instantaneously be resolved after an intervention brought on by the very friends she had distanced herself from.

The director of the miniseries, Scott Frank, explained that he wanted to explore “the cost of genius” through the main character Beth Harmon’s (played by Anya Taylor-Joy) journey as a female chess prodigy with a troubled backstory. And the miniseries does exactly that. Beth triumphs win after win against opponents who doubt her from the get-go, being a woman playing in the male-dominated sphere of competitive chess. But what really is portrayed as the “cost” of genius along the way is blurred in the miniseries, making it controversial among viewers who thought it did not accurately represent the serious issues it tries to tackle.

However, the ending is open to interpretation. Has Beth really overcome her alcoholism and substance abuse overnight? Or has she made strides in what is something she will have to continue to work to combat? As she sits down to play with an old gentleman for a game of chess in a park in the final scene, she is, at last, acknowledged as an equal opponent, only after having made her way up the world of competitive chess to show that women are just as capable. She has won for the day, but there is still progress to be made. Perhaps that is what we are left to consider.