The International Olympics Committee (IOC) should stand by LGBTQ+athletes 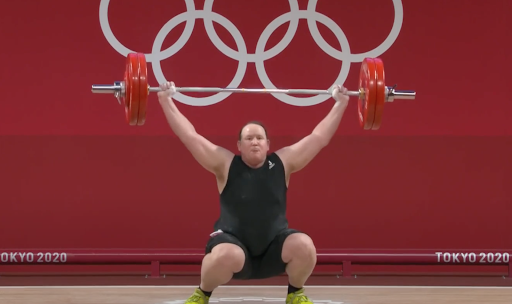 The Tokyo 2020 Olympics was a very important event for the LGBTQ+ community, as a number of athletes represented a variety of gender and sexual identities in the games. About 180 LGBTQ+ athletes participated, more than the total number of athletes in all of the previous summer and winter games combined since the Olympics started. New Zealand’s weightlifting competetor, Laurel Hubbard, became the first open transgender athlete to compete in the gender that corresponds with their individual identity rather than their birth gender assignment. This could continue to help open doors for others to follow. 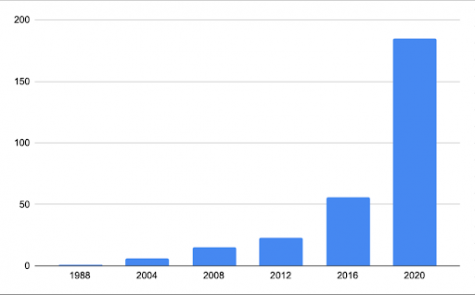 This image shows the number of out Athletes who participated in the Olympics, with the first one being Robert Dover who came out as gay (by his own volition) in 1988, just before the Summer Olympics held the same year.

(This chart was compiled with data on the Olympic athletes from Wikipedia and OutSports, a site dedicated to LGBTQ+ athletes. )

According to Elena K. (11), the 2020 Summer Olympics held in Tokyo had “really good” representation, and representation matters to those that do not often see others similar to themselves in the spotlight. To people of the LGBTQ+ community, watching athletes that are also part of the community being open and comfortable in their own skin provides encouragement and support, and gives many hope that they too can openly express their gender and/or sexual identity or identities.

The Olympics also had a positive impact on the Japanese LGBTQ+ community, which was provided with a lot of support, something which Miho S. (10), a member of the GSA said was very “comforting to see as someone of Japanese nationality.” #EqualityActJapan, influenced by the momentum of supprt for LGBTQ+ athletes gained by the Olympics, is advocating for the governmental recognition of same-sex marriage and legal protection including the banning of descrimination based on sexuality for LGBTQ+ people and their families in Japan. Their petition for recognition of these human rights has already gained more than 100,000 signatures.

Although the inclusion, diversity, and representation in Tokyo 2020 Olympics for the LGBTQ+ community was very positive, the Games themselves are inherently problematic in their rules, known as the Olympics Charters, which don’t adequately define or necessarily protect the LGBTQ+ community during the games. This is something that should be important in such an international event, as not all countries that host the Olympics are queer friendly.

To solve this, in 2014 the IOC formally “banned” discrimination on the basis of sexual orientation under Charter 6 for the 2020 Olympics in the clarification in the statement:

“The enjoyment of the rights and freedoms set forth in this Olympic Charter shall be secured without discrimination of any kind, such as race, colour, sex, sexual orientation, language, religion, political or other opinion, national or social origin, property, birth or other status.”

In accordance with this Charter, Tokyo, the host city of the 2020 Olympics banned discrimination based on sexual orientation in 2018. However, this Charter was only implemented in cities hosting the Olympics. Other prefectures where the Olympic games were held, such as in Hokkaido, Saitama, Chiba, Shizuoka, Kanagawa, Miyagi, and Fukushima prefectures, are not required to follow the charter. This meant that LGBTQ+ athletes that were competing in Olympic events held outside of Tokyo were not legally protected from harm by these IOC mandates.

The Charter has another shortcoming: it doesn’t cover hate speech online. According to NPR (National Public Radio), 64% of LGBTQ+ users on social media have to battle hate speech, a number much higher than those from other identity groups. For instance, Rossiya 1, a news channel from Russia, where homosexuality was classified as a mental illness until 1999, made homophobic comments about Tom Daley, comparing him with his “normal” diving partner (who is not a part of LGBTQ+). On another Russian network, Channel One, recognized as the official broadcast partner of the IOC, host Anatoly Kuzichev wore a wig and mocked Laurel Hubbard, calling transgender people “psychopaths” on the show “Time Will Tell”.

As the world becomes more and more accepting of LGBTQ+ athletes, there will be more open representation in the Olympic games. To accommodate this change, the IOC will have to provide better protection for their LGBTQ+ athletes and find an effective way to ensure host countries also respect the mandates of the Games. If the goal is to allow the most qualified athletes to compete based on their efforts and abilities, not their personal identity or the opinions of the spectators, the IOC has to do better.