Three street pianos to visit to bring music to your life

Since the rise in popularity of street pianos, there have been pianos set up in many places in Japan including stations and shopping malls. 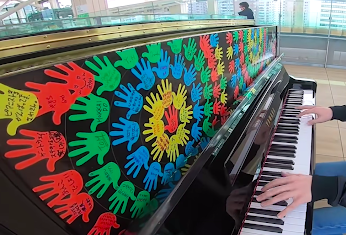 Decorations on the piano at Takanawa Gateway Station.

Three street pianos to visit to bring music to your life

Street pianos — pianos placed in public spaces for anyone to play — have become increasingly popular in Japan in the past two years ever since the installment of the grand piano in the Tokyo Metropolitan Government Building. Even professional pianists, such as Tomoya Umeda have performed on the “omoide piano” (piano of memories), the official name given by the government. Some pianists started to upload videos of them playing on street pianos on YouTube, creating a whole new genre of YouTube videos of people performing on street pianos. Some YouTuber pianists who post these contents include Yomii Piano Japan and Keichan, who each have over a million subscribers. Popular videos in this genre each have more than 15 million views and other videos are growing rapidly as well.

The reasons behind this success lie not only in the entertainment of the performances, but the shocked reactions of the people who happen to be there when the professional pianists start playing. Since the rise in popularity of street pianos, there have been pianos set up in many places in Japan including stations and shopping malls.

Here are three street pianos in the Tokyo and Yokohama area that are worth visiting.

Accessibility: Inside Takanawa Gateway Station on the Yamanote Line

Takanawa Gateway station, a new station that opened in March 2020, is modern and clean, making it a perfect place to enjoy some music. The Yamaha upright piano finally became available for people to play last month after being closed for eight months due to the pandemic. The piano is placed on the second floor of the station in a spacious area above the platforms and is decorated with hand-shaped stickers with written messages from people who participated in the Takanawa Gateway Festival in September 2020. One thing to note before going, however, is that the sound of the train and the train station announcements can be easily heard, which may be distracting to some. Despite this, the piano itself has a clear sound and is definitely worth a visit.

Accessibility: Inside Bashamichi Station on the Minatomirai Line (five minutes away from Yokohama Station)

Bashamichi station is an underground station in Yokohama City, around 30 to 40 minutes from Hiroo. The Kawai upright piano was installed in June 2019 on the first basement floor. Unlike Takanawa Gateway Station, the sound of the train is not a concern as the piano is relatively far from the platform. The piano is kept very clean and has a loud and clear sound that can be heard from the ticket gates of the station. . This is one of three “BMI (Bashamichi, Marinard, Isezaki) Street Pianos” set by the BMI committee and Yokohama City in hopes of making the city more lively.

The piano in Kannai is located in an underground shopping area called the Marinard Underground Mall. The station and mall encourages people to play music with the phrase, “share the sound of music”, written in various places such as the wall, floor, and staircases. The Kawai upright piano was installed in December 2018 in an open area where there are benches for people to sit and listen to the piano. The sound of the piano is clear and reaches the far end of the mall as well as the station. This is also one of the “BMI Street Pianos” and is only a seven-minute walk from Bashamichi station.

The words “Share the sound of music” posted in various places in the station to encourage people to play the station piano.

Playing on street pianos is a great opportunity to interact with those around you and perform in a public area. However, it is also important to remember that there are rules and regulations that need to be followed as these street pianos are managed by railway companies, stations, and malls. It usually is prohibited to play with other instruments or singers, with more than two people, and outside allowed hours. In addition to these rules, there are COVID-19 precautions that need to be followed. After the pandemic began, hand sanitizers have been placed at every street piano for people to use before and after playing and people are urged to maintain social distance with each other. Following these rules allow for a safe and enjoyable experience for everybody and for the street piano culture to continue in Japan.