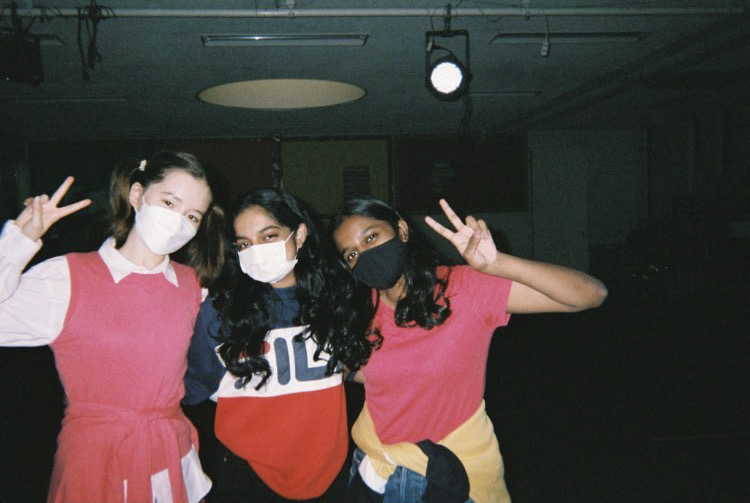 “When I was younger, I remember every summer, my family and I would go to India. I think there, you really see poverty and you really see what it’s like to have no money and to live on the streets. Whereas in Japan, I very rarely see homeless people, and even when I do see them, they have blankets or people are helping them. So there’s more support. I mean, the conditions are really bad for them, especially with the pandemic. But in comparison to, for example, India, which is a developing country, the situation is better. In India, I saw these naked children with no diapers and no underwear. They had no food and if someone gave them a drink the mother would give it to their child first. Everyone was so malnourished and they had no blankets. When I was younger, around 5 years old, I never saw it, but in 1st or 2nd grade I saw it for the first time. I remember one day I asked my mom, “Why are there so many poor and homeless people in India?” and she said, “It’s just the way of life and that’s why we should do anything we can to help them.”

And so I accumulated money I would get from my grandparents when I visited them, and one day when I had enough I was like, Mom, I want to give this money to this boy who was going around selling toys. It was so sad, because I was going to school at his age, and he was outside, selling things in the middle of traffic. I tried to give it to him but my mom said no because even if you give them money in lots of cases their parents take it from them and gamble it away. So it was a very hard situation. But I really wanted to do something, so my mom talked to this friend working at an NGO and gave them the money…I don’t really know what happened with it but that was my first encounter with service.

I was talking to my father once and I forgot what I asked him, but he told me that he was never really in poverty, but at one point when he was really little his family was on the verge of it. His father died when he was 7 years old, and so his mom had to take care of him plus three other children. His brother had finished education by then but was trying to find jobs. So they had to make a decision of who was going to school, and there were two sisters, and one brother who was my dad. So my aunts stopped going to school and started helping my grandma, and my dad kept going. But the thing is that even though that’s better than the homeless people living outside of their houses, as they had three meals a day and a communal toilet and everything, they didn’t have the most basic necessities. I think with my dad, his eyesight got really bad, but he couldn’t ask for glasses because he knew even asking for a little thing like that would throw off the entire household because everyone would have to scurry and get money for that.

I remember hearing that story and it made me so…annoyed. It made me realize how much privilege I had. It’s kind of a privileged thing to say “I have so much privilege,” but I realized my dad and other homeless people that were living there – the reason why they were there was because of chance. And here I am: I went to an Indian international school until 5th grade, I have three meals a day, and I have a bed to sleep on.

Honestly, just stepping out of your privileged life and looking through a different lens does a lot. I feel like it’s so easy to be caught up in your own life, like, “Oh I have a Macro test today,” when that’s my only problem. But for other people they may be thinking: “When is my next meal going to be? ”

That’s why it’s hard for me to go to India. Everytime I go there I get so mad because I can’t do anything. One year I went back and I think I saw the boy I was talking about but I’m not sure. I haven’t been to India in three years, and, yes, there is more improvement, the country and the economy has grown, but there are still people stuck in the same cycle. I think real improvement will be when the boy can be studying right next to me instead of worrying about earning money.

What’s really cool about the Social Service Council is that it brings everyone together. With the pandemic we can’t really volunteer, but I think it’s important that people are still doing something even if we can’t physically volunteer. This year, Elena, Aditi, and I discussed that, because we’re leaders, we have to be the bridge for people to do good and to do service.  Like, recently, for the first time, we did a food drive, and usually, the Social Service Council, you do service and you do volunteering within the council. But with the food drive, I think with events like those, everyone can participate. Especially when we do events like the Breast Cancer free dress day or other free dress days, it brings everyone together since everyone is working towards one cause. I think everyone doing some good can help. It accumulates.” — Krishi S.