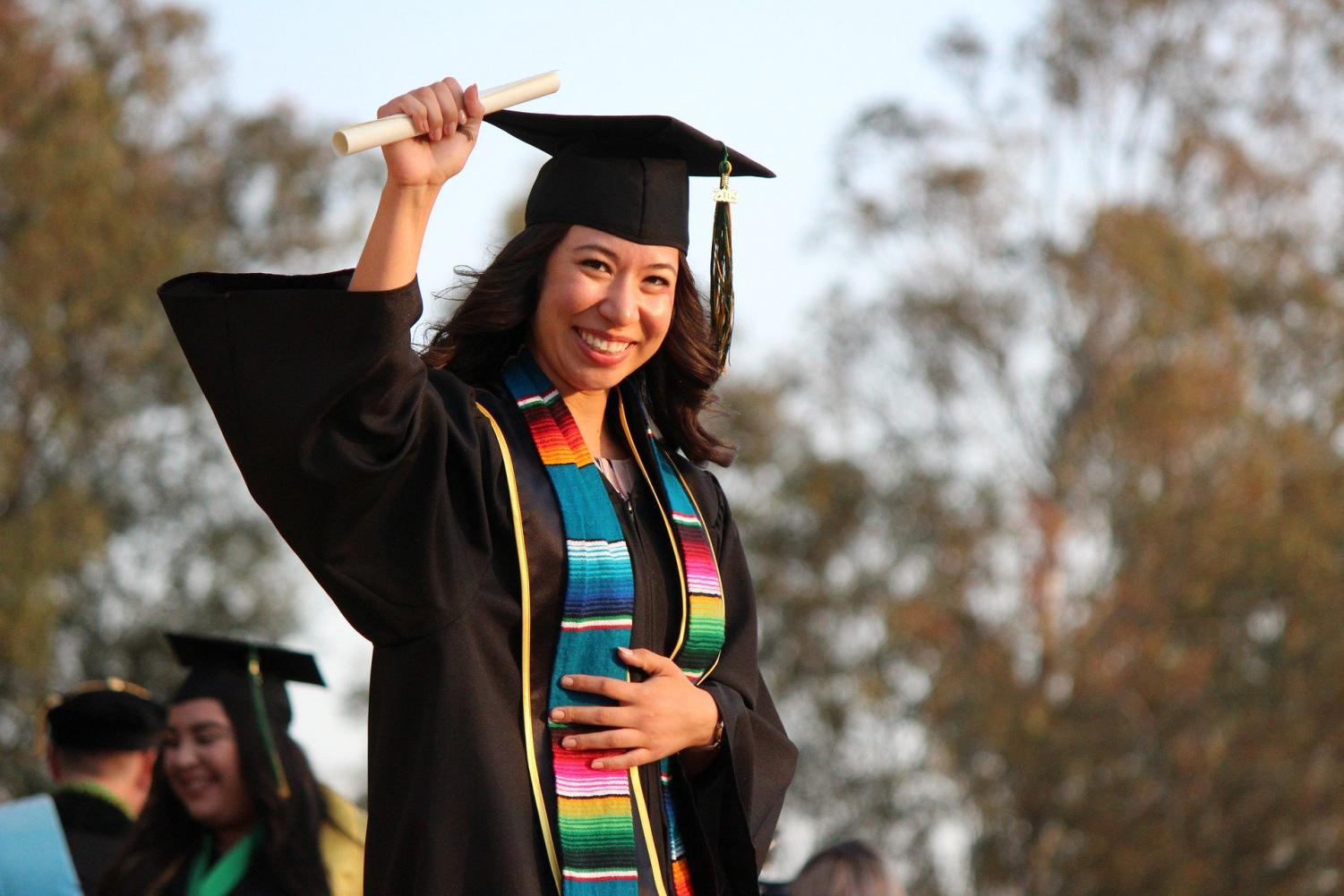 The difference between attending and not attending college can change a student’s entire life path. (Pixabay)

The difference between attending and not attending college can change a student’s entire life path.

Is college in the U.S. actually worth the stress?

Students are constantly asked by their parents, teachers, and peers, what their dream colleges/universities are or where they are applying. However, one question students are probably never asked is whether they actually want to go to college—almost as if attending college is something that the students are required to do and teachers expect. In a survey I sent out to the seniors of Sacred Heart, at least 25% of the seniors felt that they were not given a choice of attending college or not. On a scale from 1-10, of feeling no pressure from parents and teachers and feeling too much pressure from parents and teachers to get into college, all of the students felt at least some pressure, seven of those students feeling a great amount of pressure.

These results might not seem surprising to many of us; however, the difference between attending and not attending college can change a student’s entire life path. We are all uncertain of how our life will play out and also uncertain whether we will be successful or not if we attend college/university. So if we are unsure of the success that students will have by attending a college/university, is it worth the pressures and financial stresses to attend a college/university?

Forty-minutes a week, juniors and seniors at Sacred Heart have mandatory guidance classes, which give students time to work on whatever they need to for when they leave high school and to learn more about what they should expect for their futures outside of school.

Alisa B. (12), explained how guidance classes “teach us how to set realistic expectations for universities in terms of how much money we’re able to pay, what factors other than ‘ranking’ are important to consider, and what universities are the best fit for us. Knowing these things makes the college process a lot less stressful because you can set realistic goals.” Similarly, Hana N. (12) agreed that guidance class should be mandatory for all students since “it provides an opportunity for students to not only work on their applications, but also where students can ask questions regarding their applications. With all the demanding levels of school work, it’s nice to have a time set aside in my schedule to just work on college applications.”

On the other hand, Miko F (12) and Sanjana R (12) both argued that guidance classes should not be mandatory if the student doesn’t plan on entering college. They both suggested that there should be an option of a career class to prepare those students for the workforce.

However, our ideas of what guidance class is might be different from what it is intended to be. College guidance counselor, Ms. Fisher, explained that “guidance doesn’t just mean college, it can mean work, gap year(s), internships, apprenticeships, the list goes on and I support it all.” She pointed out that guidance classes “can be very beneficial, and it depends on the student what they get out of it” and “everyone can use their 40 minutes a week to focus on whatever they need to in the fall of G12.”

In the spring of G12, guidance class takes a shift into topics that are more relevant for everyone leaving high school — some of the topics which come up allow students to talk about things that they don’t necessarily talk about with their parents. She also encourages students to give her feedback so that she can make updates/changes for the upcoming years, “I would encourage students to seek me out and just ask! I love to hear from students.”

Twenty-six percent of Sacred Heart students from the class of 2019 matriculated to a US university, which has one of the most competitive and time-consuming application processes in the world and a huge student loan debt problem.  Apart from the pressure that students at Sacred Heart feel and the time-consuming aspects of applying to colleges in the US, US colleges are very expensive and require students to face their family’s financial struggles. According to the April International, an international health insurance and travel insurance company, the United States has one of the highest costs for international students. The costs found are based on the average tuition fees in the ten largest universities in the countries ranked and the average cost of living in the cities where the best universities in each country are located. Taking this into account, the United States has the highest university costs in the world, 24,914 USD, and ranks third for the highest annual total cost (university costs and cost of living) at 36,564 USD. With such high costs to go to universities in the US, students who graduate from college in debt have to pay off their student loans before earning an income of their own.

A 2014 study from One Wisconsin Institute found that it took an average of 21 years for the average college graduate with a bachelor’s degree to pay off their student loans. According to CNBC, 70 percent of college students in the US graduate with a significant amount of loans and the average student loan borrower in 2018 had 37,172 USD in student loans when they graduated. This amount of money could put a down payment on a home, pay for a new car, or fund a start-up business.

Mr. Horn, an economics teacher at Sacred Heart, explained that from a financial perspective, it is not worth working 20 years just to pay off loans. In his opinion “in cases where college does not increase earning potential, it is not worth attending.”

Ms. Fisher explained that there are definitely people who regret attending college since student loan debt is a huge problem in the U.S., and it can be very stressful to pay back massive amounts of money. But she also mentioned statistics which show that the income gap between high school and college graduates is on average $17,500/year. “By choosing not to go to college, you are essentially forfeiting $17,500 per year and $1 million over your lifetime. So even though you may have loans for a period of your life, the long-term benefit of having a college degree outweighs not having one from a monetary perspective.”

She also mentioned that some students need loans to pursue certain fields that they are passionate about and would like to work in. In her experience, for example, she needed a master’s degree to attain a license to become a school counselor, which she could not have paid out of pocket for with the salary that she made in high school, therefore “had to make my [her] peace with taking out loans.”

Ms. Fisher has also suggested ways in which all students could minimize financial debt. First off, is to look for less expensive colleges and make sure to look at the total cost of attendance (the total money required to attend which includes tuition and living costs) rather than just the tuition. Students should also target known financially generous colleges that provide greater need-based financial aid to students and to apply for scholarships. Students can also work a job during college and save their money, which could mean giving up leisure time.

There are many types of colleges in the U.S, which students should be aware of such as liberal arts universities, historically black colleges and universities, art colleges, and community colleges. Many students often worry a lot and have pressure from family and peers to apply to schools that are more well-known and with higher statistics and rankings. They often forget to think about what college is the best fit for them. Many students tend to overachieve in high school and find out once they have attended college that the college they chose was not the best fit. 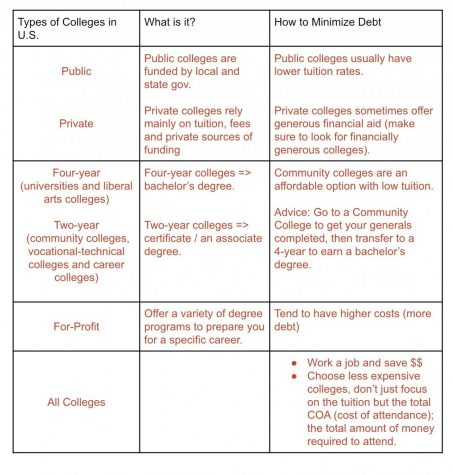 Something that might help students to think outside only the reputation of the colleges and universities is the fact that for many jobs, as Ms. Fisher explained, employers care about the diploma you have received rather than what school you have attended. For many professions, employees come from different backgrounds and the actual college they have attended is irrelevant to their positions in the job — it is more than often the level of the degree that they graduated with which affects their position or income.

Both Mr. Horn and Ms. Fisher advocate for the utilization of community colleges in the U.S. Community colleges typically offer two years of college classes and courses you can use for general education requirements and many are now offering bachelor’s degrees and associate’s degrees. Although there is usually a negative connotation around community colleges, it is a great option for students who want to receive a higher education but are struggling financially. Students can save money by attending a community college to complete their general requirements for two years, and then later transfer to a 4-year university or college where they can complete their degree.

A considerable amount of money could be saved since the average cost of attending a public community college is $2,713 per year, compared to an average cost of $7,605 per year for a four-year college or university, according to StudyUSA, a company with 40 years of expertise in providing recruitment solutions to universities and colleges in the USA. Community colleges also offer certificates and degrees in specialized career-oriented fields that allow students to enter the workforce more quickly than they would if attending a 4-year university.

Attending universities and colleges in the U.S can definitely benefit many students if they have gone through all of the options available to them, so that they can attend the college/university best suited for them and optimal for their family’s financial needs. However, for some students, taking a gap-year or not attending college/university at all could be more beneficial.

There are many paths that students could take and the success or happiness of a student should not depend on whether they have earned a college degree or not.