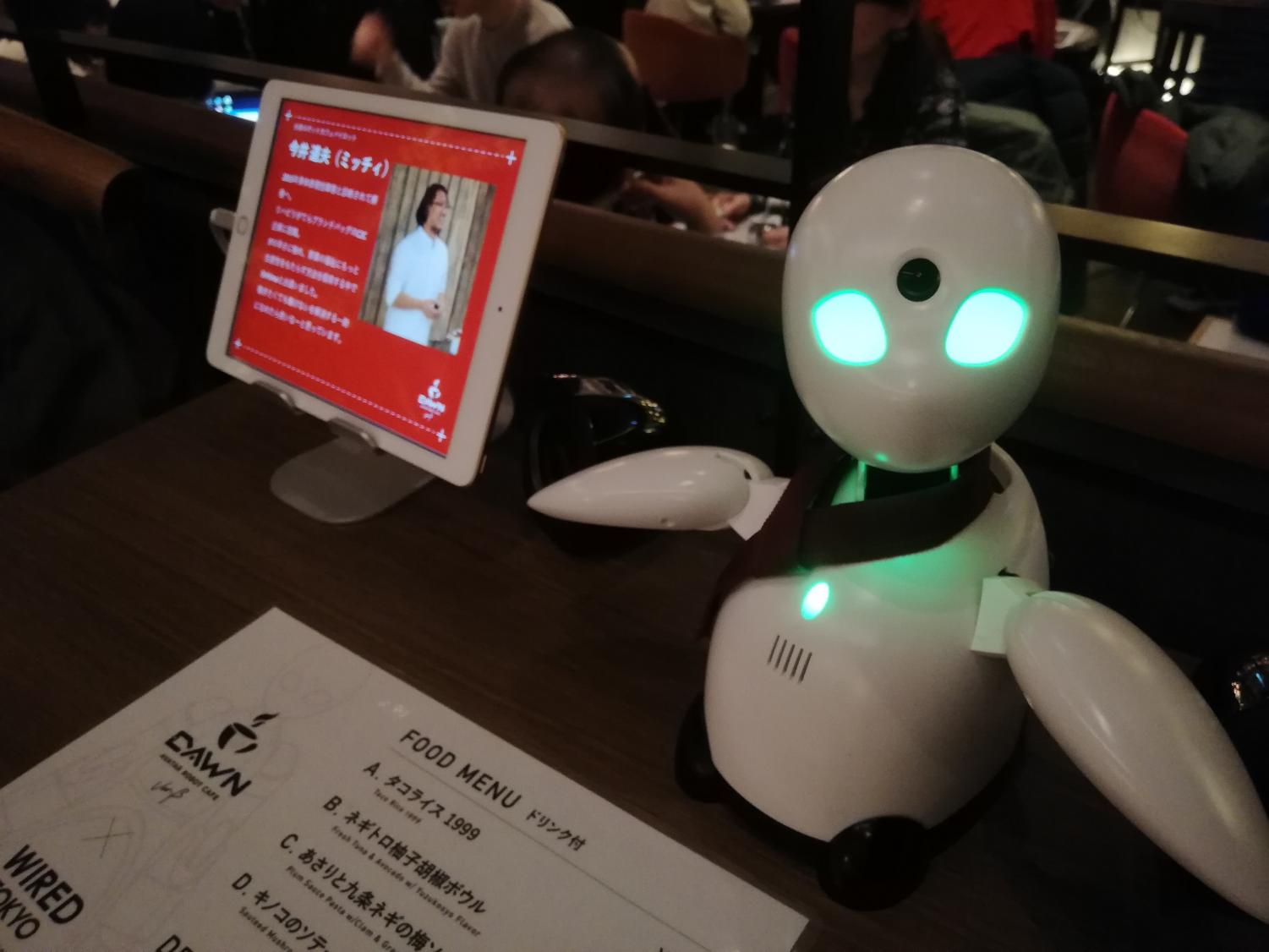 Humans not robots: a DAWN of a new world

AI, or artificial intelligence, is the new talk of the town. They are everywhere in people’s lives—yes, everywhere. The most famous and familiar examples would be those that do miscellaneous tasks for people: Apple’s Siri, Amazon’s Alexa, Microsoft’s Cortana, Google Assistant, etc. Now the industry has moved on further down the road to discuss the practical use of self-driving cars and self-bombing drones. It seems more likely that the world that was only possible in Sci-fi films—a world where people and robots live and work together—will soon be realised. A world where robots and people coexist—this idea appears to be a terrifying, horrible thought for many people. However, this might come true in a different way from what they think.

In late January this year, a cafe opened in Shibuya. This “cafe”, which was really just a corner of another bigger cafe, was nothing but unusual and extraordinary. When one goes there, a staff checks for a reservation and takes the order. There is nothing surprising about any of this, except for the fact that this would most likely be the last encounter with a “human” staff. Every table has a small robot. When the customer sits down, the robot calls out “Konnichiwa~ (Hello~)”, takes the order, and chats with the customer. When the drinks are ready, a bigger robot brings them to the table and joins in the conversation for a while.

Now, the biggest question is: are they AI? The answer is: no, they are not artificial intelligence. It is probably not appropriate to call them robots either; they technically are not “robots”. They are in fact humans, who remotely control these robots as a Bunshin, a “second-body” or a “body double” for themselves. These people, who are called “pilots”, see through the camera and speak through the speakers of these robots. The Bunshins are the medium for communication for them.

These robots, which are named OriHime and OriHime-D, are provided by a Japanese company called Ory Lab, the same company that hosted the aforementioned café. The pilot can remotely control the robots via the internet from anywhere in the world, and communicate with people far away using the internal camera, microphone, and speaker. OriHime, the smaller model, can perform simple movements like turn its head, raise its hands, wave, and clap/applaud, while OriHIme-D, the larger model, can move forwards, backwards, spin around, and carry basic things like paper cups and trays. In a way, they are just like any other video calls, just done through a robot that can move.

Ory Lab also provides a tool named OriHime eye. This enables people with physical disabilities to self-express, using a keyboard that appears on a screen. The pilots can do things like write emails, control OriHime robots, and speak by having the computer read out what they type. This tool and OriHime have been used by people with cerebral palsy, ALS patients, and people with sequelae from major injuries as a tool to connect with others and the society.

All of these products were invented and developed by Kentaro Yoshifuji, or more commonly known as Ory Yoshifuji, the founder and CEO of Ory Lab. In 2004, he received the Grand Award at the Japan Science & Engineering Challenge (JSEC), a competition for high school students to present their research and findings, and in 2005, he won a prize at the International Science and Engineering Fair (ISEF), a well-known international science fair/competition for high school students all around the world. In 2016, he was chosen in Forbes’s 30 Under 30 Asia (Manufacturing & Energy category), a list of 30 influential leaders under the age of 30 in different categories. Now, he is gaining attention from the media in and out of Japan with his epoch-making projects and vision.

“Loneliness can be eliminated.” – Ory Yoshifuji 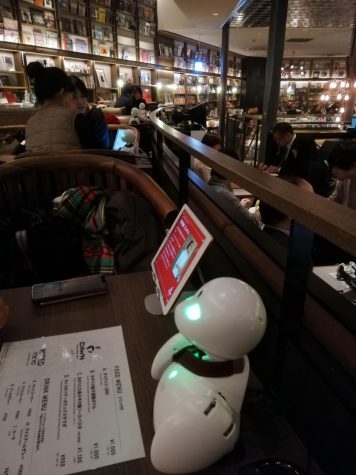 Yoshifuji’s inventions were all born from the same idea: ending loneliness. This vision comes from his own experience back in his tweens, when he became unable to attend school for three and a half years because of acute anxiety. In a 2019 interview with NHK World, Yoshifuji describes his experience at the time: “I don’t know if ‘lonely’ is the right word to describe how I felt back then, but basically, I felt worthless. I felt like the world would be better off without me. It was an awful feeling. Some nights, I would leave the house and come to, standing in front of a nearby pond. Other times I would just stare at the ceiling, listening to the hands of the clock move for an entire week.” Now, he has made it his life’s mission to create a way for humans to overcome and prevent loneliness.

Although OriHime robots have been put into application for people in hospitals or struggling with physical conditions that restrict their means of social activity, Yoshifuji’s ultimate objective is not to help people with physical disabilities. Instead, he says in the aforementioned NHK interview, “Things like isolation are issues that people are bound to face going forward. And they need to be resolved for us to be able to live happily. […] So how can we get rid of those feelings of isolation, that mental strain? That’s the theme of my work even if I have to work alone. I don’t know how many years I have left, but I’m going to spend them trying to end loneliness.”

In fact, OriHime is also used by corporations to achieve a better form of teleworking. NTT East, the regional subsidiary of a Japanese well-known telecommunications company NTT, is one of those who uses OriHime for people working from home. In the conventional method of video conferences, direct communication between the telecommuter and the workers at the company was limited in the time frame of the conference, which made some telecommuters feel isolated from the work. Additionally, some workers were anxious and reluctant to use video conferences, since it can reveal parts of the workers’ household. These difficulties were improved by OriHime robots that could be accessed by workers any time, and directly communicate without having to worry about privacy issues.

Now, Ory Lab themselves have opened “Work-Remotely-Café” called Avatar Robot Cafe DAWN ver.β in limited time periods in October 2019, December 2019, and January 2020 as a social experiment. This cafe, which is also described at the beginning of this article, had people remotely serving customers, taking orders and delivering them through OriHime robots. In a recently posted introductory video about this social experiment, workers gave positive feedback on their experiences at the cafe. Saechan, a worker with somatic symptom and/or related disorders (described in the English video as physical manifestation disorder), said “People around me say that I have become much happier and positive since I started working through OriHime.” 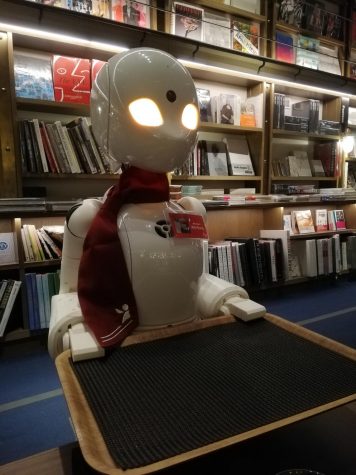 Loneliness and isolation is not an alien topic for many people today. According to the British National Health Service, loneliness is often associated with things like retirement, living or working alone, illnesses and disabilities, moving into a new environment, and social anxiety. Everyone can be a victim of loneliness. Everyone has the potential of becoming a victim of social isolation. At times like that, it is always important to remember that a Bunshin might be waiting to discover the new possibilities of the world together.