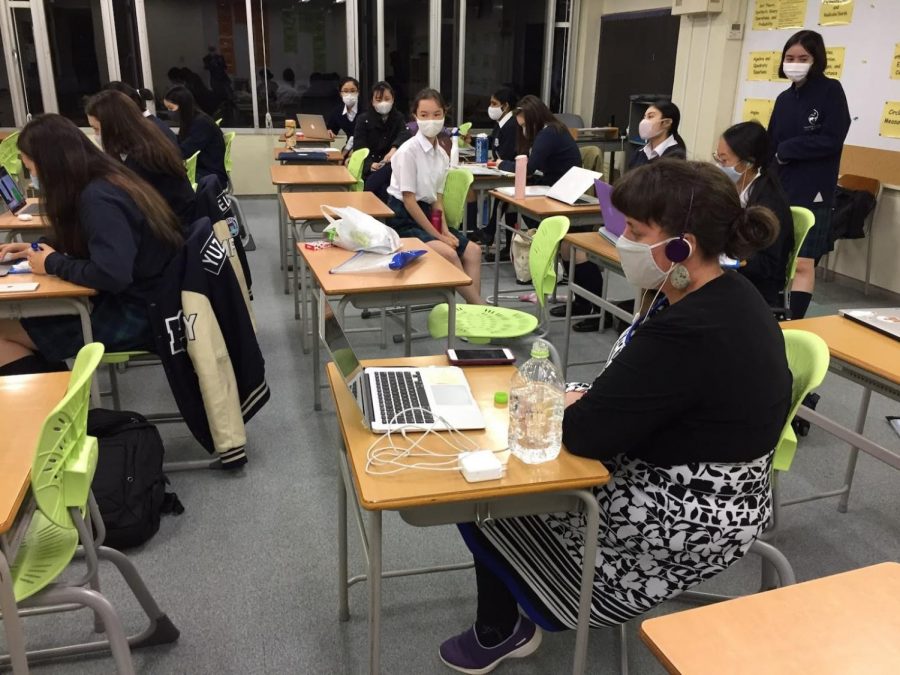 The participation of the KPASS Brain Bowl has been an annual tradition granted to the philomathic high school students here at Sacred Heart. However, due to the unprecedented times, it was held online via Google Meet on October 8.

Besides the fact that members would be participating in the Brain Bowl at school from their computer screens instead of traveling to Zama like previous years, everything from attracting participants in the weekly Tuesday assemblies to having tryouts onsite in the AV room felt normal, at first.

Then, on Oct. 4, the school announced they would be moving onto the White Plan until Oct. 7, and practice sessions held in the morning on site transitioned to virtual ones. All of the members from the veterans to the newcomers were comfortable with BuzzIn.live, an application to answer questions throughout the event. However, on the third day of e-learning, the school announced that they would be extending the White Plan until the 16th for the Middle and High School students. This news confused the members as although they had been participating in the practice sessions virtually, they thought they would be at school physically for the actual tournament. On the day before the tournament, members were informed by Ms. Economou, the sponsor for the event, that they would be required to be at school for transparency and that Ms. Young had allowed it since it was a small gathering of 12 students.

The day itself was quite unusual. Brain Bowl participants e-learned from their homes until period 5. They were excused after period 4, so that they could travel to Sacred Heart to compete.

While members were positive about not having to travel to Zama which is located in Kanagawa prefecture and being able to compete in a familiar environment, there were problems that arose due to the event being held virtually.

Firstly, the time schedule was completely ignored, because when some teams were unable to join the Google Meet on time for the first round, it had a domino effect on the other rounds.

Secondly, some questions were difficult to hear, whether that was due to a sudden freeze of the participants’ screens or a problem with the reader’s microphone which wouldn’t have happened if it were being held in person.

Lastly, there were two instances where Sacred Heart students were not able to point out when the answers from the judge’s pamphlet were outdated or plain wrong and the teams with the answer that aligned to the expected answer were granted a point. For example, this problem occurred when the two teams were asked: “What is the second-largest political party in Japan?” The other team answered Komeito and since the expected answer was outdated, the judge granted them a point. So, when the Sacred Heart team tried to point out that the Constitutional Democratic Party was the correct answer, it was pushed aside as the judge had to contact other judges virtually to see if this was correct.

On a brighter note, Sacred Heart placed fourth and four students placed in the top 10. Overall, Brain Bowl was a hit as it was not convenient to stay at school but also much safer than traveling to Zama for the event. That said, when the pandemic has passed, Brain Bowl should be on site.