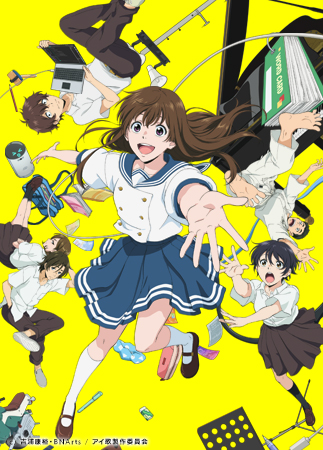 Artificial intelligence is human too

It’s a universal experience to mess up a cake. You add a little too much of one ingredient, then add more to balance it out: an endless cycle that only results in a clump of sugar and flour that can barely be called a cake. Released in late October of 2021 and directed by Yasuhiro Yoshiura (Time of Eve, Pale Cocoon), Sing a Bit of Harmony (Japanese: アイの歌声を聴かせて, Hepburn: Ai no utagoe wo kikasete) is exactly that: an embarrassing failure, a “wannabe” masterpiece, a mixture of every cinematic aspect that could go wrong.

The film is set in a future where society is run by Artificial Intelligence (AI). The story follows a high school girl, Satomi (Haruka Fukuhara) whose mother works at a company known for manufacturing AIs. Her mother initiates a new experiment to test whether or not an AI (Tao Tsuchiya) disguised as a human could survive a week at school without the students noticing its real identity. However, Satomi and a random selection of classmates accidentally find out about this experiment before the AI even arrives. The film follows them working together, overcoming multiple obstacles to keep their secret in order to avoid failing Satomi’s mother’s experiment.

When the film reaches its climax, it doesn’t prompt an ethical question but instead forces a conclusion onto the audience that AIs are in fact just like humans: capable of love and emotions. Is it right to force a belief onto the audience, especially regarding a controversial topic that is still not yet realized? Rated G, the film is open for people of all ages, including children who should be exposed to arts with open interpretations, not textbook-style concrete answers. Not to mention the incomplete build-up to the supposedly heart-touching message. The film fails to weave in its purported diverse genres into one story, resulting in a series of unfinished stories with cliffhangers for each genre: science fiction, romance, and comedy. Their attempt to humor the audience with the AI’s “silly misses” only showered the audience with secondhand embarrassment. Whether or not the film aimed for secondhand embarrassment is a doubtful guess.

There’s a reason why there aren’t many anime films that come in the form of a musical. It simply doesn’t work. An important element of musical theatre is the buildup of emotions that slide into a performance, driven by exaggerated expressions and demanding choreography. Now, that doesn’t mean animation lacks accurate expressions and movements. In fact, thousands and thousands of animated films almost perfectly portray emotion and motion and have already touched audiences from around the world. In order to succeed with the theatre-like buildup, the film must exceed with the expressions and movements. It fails to even cross the threshold of the bare minimum and completely ignores the dramatic buildup.

“It was embarrassing to watch as they sing suddenly,” says a reviewer, stating the awkward atmosphere throughout the audience as they bear with the song that has no significant relation to the film’s message. To convey an ethical debate through singing robots that already lack the ability to express emotions in a human-like manner in the form of a musical, Yoshiura was set for an impossible task which he visibly failed.

Sing a Bit of Harmony fails to complete too many things. Its attempt to become a unique film with elements of humor and music in addition to the controversial topic was not just an unsuccessful but humiliating one, not worthy enough for publication; the factual release of the film is a whole other problem. This cinematic disaster is definitely not worth the watch, take it out of your watch list.