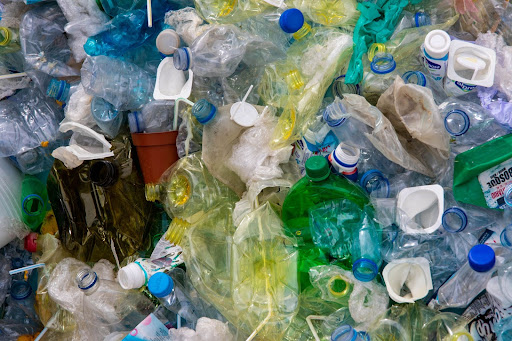 Plastic recycling for a greener future

The overuse of single-use plastics has and continues to cause several environmental issues for humans as well as wildlife. The most commonly known detrimental effect of plastic is the death of marine species, including turtles, whales, and fish that accidentally ingest plastics. However, there are many more harmful effects on the environment. One that many may not be aware of is the damage that plastic has on land animals. When single-use plastics are thrown away, many end up in landfills, where other trash is also thrown away. This plastic can be ingested by land animals, and the toxic chemicals released from the plastic can seep out from the landfills into the ground and end up contaminating bodies of water such as rivers and oceans.

There are different types of plastic that make up the plastic products that we use in our daily lives. In total, there are six types: PS, PP, LDPE, PVC, HDPE, and PET. PS is mainly used in plastic cutlery/dinnerware, PP is used for packaging such as bottles or cups, and LDPE is used in grocery bags and plastic wrap. PVC is used in window frames and pipes, HDPE is used for containers, and PET is commonly used in bottles for beverages. The most common plastic types that are recycled are HDPE, and PET. It is possible to recycle both PP and LDPE, but it is uncommon for them to be recycled. Unfortunately, PS and PVC are rarely ever recycled. This is because PP, LDPE, PS, and PVC are thinner plastics compared to HDPE and PET, making it extremely difficult to recycle.

Some products made out of plastic that we all use often are pet bottles, plastic cups, plastic bags, and straws. In fact, containers and bags account for approximately 36% of plastics produced. When going out, people often end up buying at least one drink that comes in one of the mentioned plastic products. To help reduce the amount of plastic used in this situation, we can carry around our own reusable water bottles from home and fill those bottles. Alternatively, if a reusable bottle is not available, we can recycle the plastic so that they do not go to waste.

This plastic usage is especially a highly problematic issue in Japan. If you go into a supermarket, you will notice that almost all of the fresh foods are wrapped in plastic. For example, a single apple, corn, banana, or lemon is almost always seen packaged in some sort of plastic wrap.

Because of this, according to a 2018 United Nations report, Japan was the second-worst country for plastic waste per capita after the USA. According to CNN, 30 billion plastic bags are consumed in Japan annually. Though the recycling rate of plastic is 85% in Japan, 65% of the recycled waste is incinerated for energy, and only 27% of it is recycled into other products.

Before, the types of plastic that were allowed to be recycled in Japan were limited. However, Japan recently announced a new law that advocates for the recycling of plastic.  The recycled plastic is used for many types of products such as bags, packaging, or building materials.

When recycling plastics, we can reprocess the used plastics into new and different products. The process of plastic recycling is usually done mechanically. The plastics are first thrown away by consumers and are sent to recycling centers where they are first sorted according to their polymer type. They are then cleaned of any impurities and are either shredded or melted. The melted plastic produces pellets that are then molded into shapes. These shapes create the product, which is then sent out to be sold again. If we start recycling, we can reduce the amount of plastic being thrown away into the ocean or landfills, reduce pollution from the combustion of plastics, and also prevent the manufacturing of new plastic.

Although the ultimate goal is to completely remove the production and use of plastic, recycling is also an important part of reducing plastic waste. We should all first start by being aware of our plastic usage and the effects it has on our environment. This way, the death of marine and land animals from the consumption of plastic will decrease and we will generally see a decline in plastic pollution.